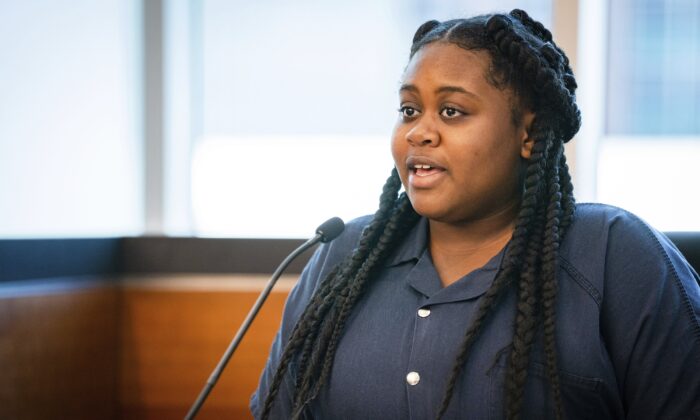 Judge Orders Iowa Teen to Pay $150,000 to Family of Alleged Rapist She Killed

An Iowa judge ruled on Tuesday that a teenage human trafficking victim must serve five years of closely supervised probation and pay $150,000 in restitution to the family of her accused rapist, whom she stabbed to death.

Pieper Lewis was a 15-year-old runaway seeking to escape an abusive life with her stepmother when she killed her accused rapist, 37-year-old Zachary Brooks, in June 2020, by stabbing him more than 30 times in a Des Moines apartment.

Lewis, now 17, has maintained that she was trafficked against her will to Brooks for sex multiple times and stabbed him in a fit of rage.

Police and prosecutors have not disputed that Lewis was sexually abused and trafficked. But officials argued that Brooks was asleep at the time he was stabbed, and did not present an immediate danger to her.

Last year, she pleaded guilty to involuntary manslaughter and willful injury in the 37-year-old’s killing. Each charge was punishable by up to 10 years in prison.

Polk County District Judge David M. Porter deferred Lewis’ prison sentence on Tuesday, meaning that if she violates any portion of her probation, she could be sent to prison to serve 20 years.

Porter also said Iowa law compelled him to order the $150,000 payment to the estate of Lewis’ accused rapist because the “court is presented with no other option,” noting the restitution is mandatory under the law that has been upheld by the state’s supreme court.

According to the law (pdf), the court is required to order offenders to pay at least $150,000 in restitution if they kill another person—which has struck some observers in this particular case as unnecessarily harsh.

Donations are pouring into a GoFundMe campaign set up for Lewis, which has already raised more than $350,000, more than enough money to pay the $150,000 restitution the Iowa court ruled on Tuesday.

Leland Schipper, a former teacher of Lewis at Des Moines Lincoln High School, organized the GoFundMe account, which by Sept. 14, surpassed the $200,000 goal, with donations continuing to pour in. All additional money raised past the $150,000 to cover the restitution payment will help her pay for college or start her own business, and help other young victims of sex crimes, the page reads.

“Pieper has five years of probation ahead of her; five years that she will be required to be nearly perfect to avoid facing 20 years in prison,” said Schipper. “Pieper’s path to true freedom will not be easy, and she is still a teenager that has experienced a lot of trauma.”

After Lewis ran away from her abusive stepmother, she was allegedly taken in by 28-year-old Cristopher Brown, who had found her sleeping in the hallways of an apartment building. She said Brown told her she couldn’t live with him for free, and he created an online dating profile to arrange for her to have sex with other men for money.

Lewis said one of those men was Brooks, who raped her multiple times in the weeks before his death. She recounted that one day, she refused Brown’s request to go to Brooks’s apartment to pick up marijuana, but Brown then forced her at knifepoint to go to his apartment.

“Mr. Brooks had raped me yet again and [I] was overcome with rage. Without thinking, I immediately grabbed the knife from his nightstand and began stabbing him,” Lewis stated in the plea agreement. “I further acknowledge that the multiple stab wounds that I inflicted upon Mr. Brooks thereafter ultimately resulted in his death.”

The day after the stabbing, Lewis was arrested at Brown’s apartment. She was held for two years at a juvenile detention facility, where she earned her GED diploma.

During Tuesday’s sentencing hearing, Lewis’ lawyers accused Brown of aiding and abetting sex trafficking—but police have not yet pressed any charges.

John Sarcone, an attorney in Polk County, told The New York Times that “the matter is still pending and we do not comment on pending matters.”