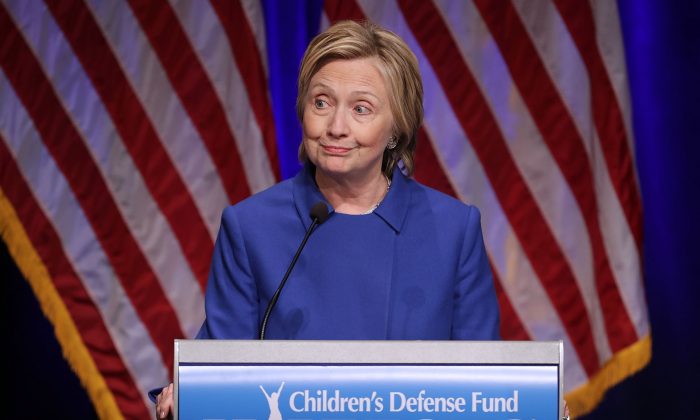 Former Secretary of State and former Democratic Presidential nominee Hillary Clinton delivers remarks while being honored during the Children's Defense Fund's Beat the Odds Celebration at the Newseum in Washington on Nov. 16, 2016. (Chip Somodevilla/Getty Images)
US

The three Clinton lawyers are licensed to practice law in Maryland, according to The Baltimore Sun, and if the commission determines they are guilty of misconduct, they could face professional sanctions.

“There are allegations of destroying evidence,” Harris said at a Sept. 11 hearing, according to The Washington Times, adding that state rules require the bar to investigate complaints.

The complaint was brought to the court by attorney Ty Clevenger, who has been pursuing sanctions against Clinton and her legal team, and pushing the FBI to release details on its investigations into Clinton.

Clinton was under federal investigation for her use of a private email server when she served as secretary of state. It began with investigations into her actions—or lack of actions—during the 2012 terrorist attacks in Benghazi that killed four Americans including U.S. Ambassador to Libya Christopher Stevens. The investigation grew more serious after Clinton deleted 33,000 emails, and after her staff destroyed data, phones, and laptops that were requested by investigators.

During a July 2, 2016, hearing, Rep. John Ratcliffe (R-Texas) noted some of the evidence destroyed by Clinton and her team, which he said should have been grounds to prosecute Clinton for obstruction of justice.

Ratcliffe read from official FBI reports what evidence had been destroyed.

Ratcliffe said the State Department and Rep. Trey Gowdy (R-S.C.) told Clinton they were seeking laptops of her lawyers, Mills and Samuelson—who are among those the Maryland judge recently gave the greenlight to investigate—and their laptops were “wiped clean with BleachBit.”

BleachBit is a tool to erase data from computers.

Clinton’s email archive was also wiped clean with BleachBit, after her emails were subpoenaed. And following another subpoena, someone also manually deleted her server backups.

Ratcliffe said 13 of Clinton’s mobile devices were “lost, discarded, or destroyed with a hammer.”

Investigators were told an Apple Macbook and thumb drive containing Clinton’s email archives had been lost. They were denied access to a personal Apple server that Clinton used for her work emails. Two BlackBerry devices given to the FBI had no SD cards and were missing their SIM cards.

Clevenger, whose request for an investigation into the matter was recently approved by the Maryland judge, argued, according to The Baltimore Sun, that Clinton’s lawyers engaged in misconduct by destroying evidence.

Clevenger is a Texas attorney who lives in New York, and has in the past brought corruption accusations against both Republicans and Democrats. He is writing a book on political corruption, and views the Clinton case as a study of politically affiliated attorneys receiving special treatment.

He explained his thesis to The Baltimore Sun after the hearing, that “If you are a politically prominent attorney, you are held to a different standard. I’ve seen this in Texas, California … I choose this case because I knew people would pay attention.”