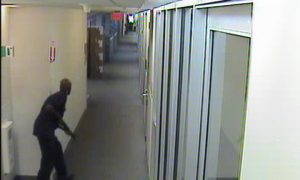 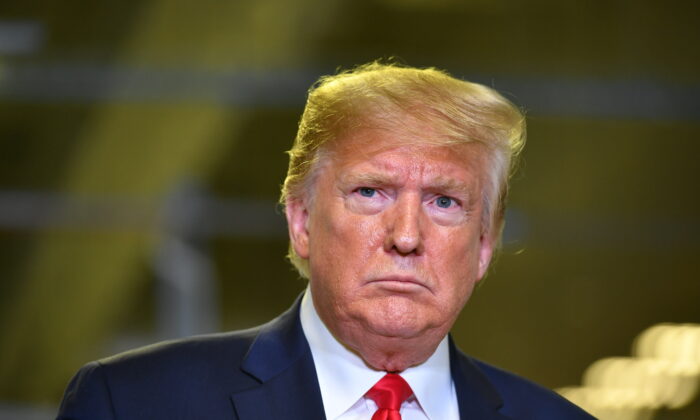 President Donald Trump speaks about the impeachment inquiry during a tour of the Flextronics computer manufacturing facility where Apple's Mac Pros are assembled in Austin, Texas, on Nov. 20, 2019. (Mandel Ngan/AFP via Getty Images)
Trump Administration

A federal judge on Nov. 26 issued a preliminary injunction ordering two federal agencies to begin releasing documents related to the Trump administration’s dealings with Ukraine by Dec. 12, saying the records were of public interest.

The documents were sought under a Freedom of Information Act (FOIA) request by the Center for Public Integrity (CPI), a nonprofit news organization.

United States District Judge for the District Court for the District of Columbia, Colleen Kollar-Kotelly, on Monday ruled that the U.S. Department of Defense (DOD) and the U.S. Office of Management and Budget (OMB) produce the records. The records required are related to the Trump administration’s alleged withholding of military aid to Ukraine—a central complaint amid the ongoing impeachment inquiry against President Donald Trump.

House Democrats have alleged that the White House withheld $400 million in military aid to Ukraine in exchange for investigations, which President Trump has denied.

NEW: A federal judge has granted @publicintegrity a preliminary injunction in their FOIA lawsuit seeking OMB/Defense Dept. docs on the withholding of Ukraine aid. She orders the agencies to release all non-exempt docs by 12/20, with first batch due 12/12. https://t.co/86WCuuJ9aA pic.twitter.com/wnf430dZXG

Kollar-Kotelly handed the federal agencies a deadline to release the 211 pages of records, which include communications between the Pentagon, the Pentagon’s comptroller, and OMB. At least half the responsive, non-exempt records—about 106 pages—must be released by Dec. 12, while the rest must be produced by Dec. 20, the ruling (pdf) states.

The judge ruled that the documents are of public interest as the news outlet requested the information to inform the public about matters relating to the impeachment proceedings.

“The records sought by Plaintiff go to the core of the impeachment proceedings as alleged—whether or not President Trump and his administration withheld payments under the USAI (Pentagon’s Ukraine Security Assistance Initiative) in order to pressure Ukraine to conduct an investigation,” Kollar-Kotelly wrote.

“Only an informed electorate can develop its opinions and persuasively petition its elected officials to act in ways which further the aims of those opinions.”

Amid the whistleblower’s claims that the president had suspended all security assistance to Ukraine, a senior administration official told The Epoch Times on Oct. 2 that the United States military aid was sent as scheduled.

The senior administration official claimed the aid underwent a routine review process after a so-called footnote was placed on the funds to Ukraine and was disbursed on or ahead of schedule. The aid underwent the review around the time White House officials were considering a broad range of foreign aid cuts.

Instead of the abrupt suspension, the aid package underwent a typical process, the administration spokesman said. The budget office was simultaneously considering a rescissions package that could impact nine other countries.

Instead of being delayed or held back, the money was sent out once the policy process was completed, the official added. The funds, which were set to expire on Sept. 30, went out in early to mid-September, according to the Department of Defense.

Congress approved $250 million in funds for Ukraine, known as the Ukraine Security Assistance Initiative. The fund was created in 2015 in response to Russia’s annexation of Crimea.

Trump tasked Esper and then-national security adviser John Bolton to review the Ukraine aid to make sure the money wasn’t wasted and that allies were paying their fair share.

“The president has the full authority to do what he feels is right with the money regarding the process,” the administration official said.

The July call between Trump and Zelensky is at the core of the whistleblower complaint (pdf), which was filed in August and released to the public on September 26. The whistleblower claimed that Trump leveraged his office for political gain by pressuring Zelensky to investigate former Vice President Joe Biden and his son Hunter Biden.

The whistleblower suggested that Trump’s request may have amounted to a violation of campaign finance laws. The Justice Department reviewed the complaint for evidence of criminality and determined no further action was necessary. Democrats have nonetheless taken up impeachment proceedings, claiming, in part, that Trump pressured a foreign leader to investigate an election opponent.

During the call with Zelensky, the transcript of which was released by the White House, Trump inquired about a former Ukrainian prosecutor. Joe Biden, in videotaped comments, had bragged in 2016 about forcing the removal of top Ukrainian prosecutor Viktor Shokin by withholding $1 billion in loans while he was vice president. At the time Shokin was removed, he had been investigating Burisma, the gas company where Hunter Biden served on the board of directors.

In an affidavit (pdf) obtained by investigative reporter John Solomon for The Hill, Shokin told a European court that he was removed due to pressure from Biden because Shokin refused to drop the Burisma investigation.

Judge Kollar-Kotelly ruled that the information requested by CPI could potentially inform American citizens amid the ongoing congressional hearings about an issue “of the highest national concern.”

“In a functioning democracy, an informed electorate always inures to the public benefit,” Kollar-Kotelly concluded.