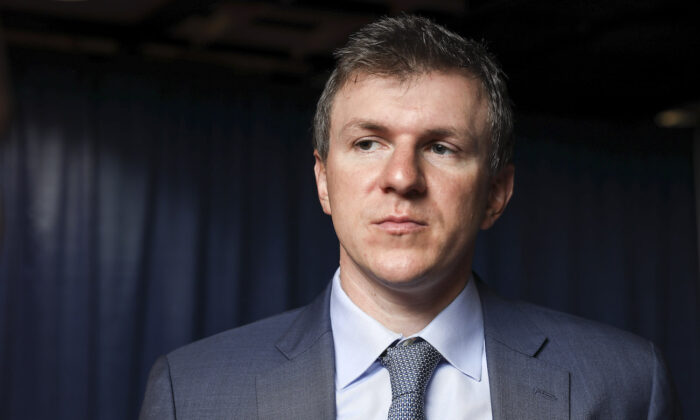 A federal court on Nov. 11 ordered the Department of Justice (DOJ) to stop extracting and reviewing data from phones belonging to Project Veritas founder James O’Keefe.

The order from Judge Analisa Torres of the U.S. District Court of the Southern District of New York, obtained by The Epoch Times, says that by Nov. 12, the DOJ “shall confirm via email that it has paused its extraction and review of the contents of Petitioner O’Keefe’s phones.”

It comes after O’Keefe filed a motion Nov. 10 for appointment of a special master—a designation often used for people doing purely investigative work.

O’Keefe’s home in Westchester County, New York, was raided early Nov. 6 by the FBI. He later confirmed the raid.

“Banging on my door, I went to my door to answer the door and there were 10 FBI agents with a battering ram, white blinding lights. They turned me around, handcuffed me, and threw me against the hallway,” O’Keefe told Fox News’ Sean Hannity on Nov. 8. “I was partially clothed in front of my neighbors. They confiscated my phone. They raided my apartment.”

An FBI spokesman told The Associated Press on the same day that agents had conducted a “court-authorized law enforcement activity” at an apartment in Manhattan and an address in Mamaroneck in Westchester County, New York. The spokesman did not appear to comment on whether the searches were linked to Project Veritas.

In the same statement, O’Keefe said that the DOJ—specifically the United States Attorney’s Office for the Southern District of New York—appeared to be investigating the alleged theft of a diary of Ashley Biden, the daughter of President Joe Biden.

“We don’t know if it was, but it begs the question: in what world is the alleged theft of a diary investigated by the President’s FBI and his Department of Justice? A diary! This federal investigation smacks of politics. Project Veritas never threatened or engaged in any illegal conduct,” O’Keefe said.