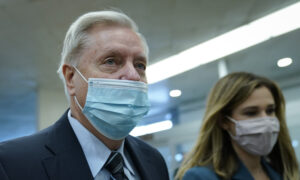 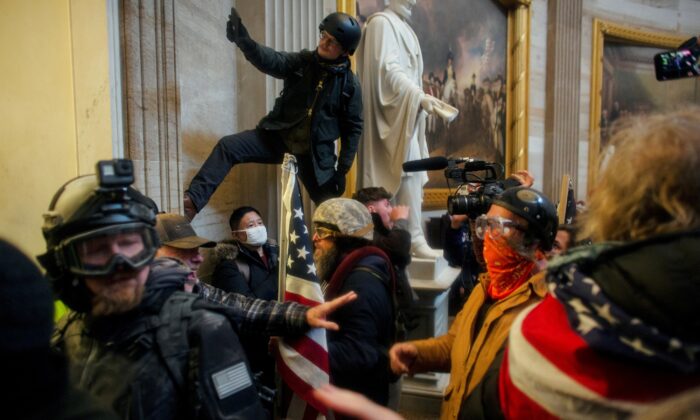 A federal judge on Wednesday ordered an alleged member of the Proud Boys group detained pending trial over his role in the Jan. 6 breach of the U.S. Capitol, with the defendant’s attorney seeking to portray his client as being spurred to action out of a “delusional belief” he developed on account of President Donald Trump’s contest-of-election rhetoric.

Dominic Pezzola, also known as “Spaz,” was indicted in federal court in the District of Columbia on charges that include civil disorder, unlawfully entering restricted buildings or grounds, and disorderly and disruptive conduct. Pezzola also faces charges of robbery of personal property of the United States; assaulting, resisting, or impeding certain officers; destruction of government property; and engaging in physical violence in a restricted buildings or grounds, prosecutors said.

Pezzola’s lawyer, Jonathan Zucker, in a court filing on Wednesday, told the judge that his client acted on the “delusional belief” that the November presidential election was stolen.

Zucker claimed Pezzola “was one of millions of Americans who were misled by the President’s deception,” noting there was “no rational basis for such a claim.”

Trump has claimed repeatedly that he was cheated out of an electoral win, alleging widespread fraud and last-minute changes to election laws under a questionable legal foundation led to a massive expansion of mail-in balloting that was also fraught with irregularities.

U.S. Magistrate Judge Robin Meriweather said it was a “close call” in deciding whether Pezzola should be detained, but ultimately determined he posed a danger to the community.

The criminal charges stem from allegations that he took part in breaking into the Capitol while lawmakers were assembled for a joint session to consider the electoral college votes for president.

Pezzola was originally charged by criminal complaint and arrested on Jan. 15, according to Justice Department records.

Prosecutors have alleged that, on Jan. 6, Pezzola confronted a Capitol Police officer trying to control the crowd and “ripped away the officer’s riot shield,” which he is alleged to have later used to smash a window at the Capitol.

Pezzola was later featured in a video posted to social media showing him smoking a cigar inside the Capitol building, according to the criminal complaint filed against him (pdf).

“In the video, the individual states words to the effect of, ‘Victory smoke in the Capitol, boys. This is [expletive] awesome. I knew we could take this [expletive] over [if we] just tried hard enough,'” the criminal complaint states.

The case against Pezzola is being prosecuted by the U.S. Attorney’s Office for the District of Columbia and the Department of Justice National Security Division’s Counterterrorism Section.

Founded in 2016, the Proud Boys began as a group protesting political correctness and perceived constraints on masculinity. The Proud Boys official website, before it was taken down, described its core values as being pro-gun rights, pro-free speech, anti-racism, and anti-drug war.