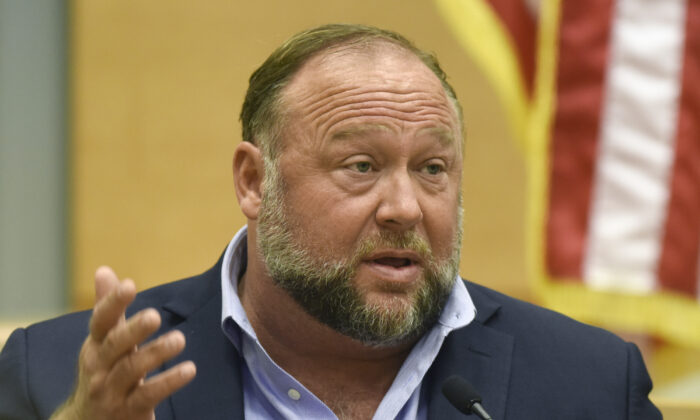 Alex Jones takes the witness stand to testify at a trial at Connecticut Superior Court in Waterbury, Conn., on Sept. 22, 2022. (Tyler Sizemore/Hearst Connecticut Media via AP, Pool, File)
US News

A judge has ordered Infowars host Alex Jones and his company to pay an extra $473 million in a lawsuit filed by families of victims of the Sandy Hook school massacre. The order comes on top of the nearly $1 billion jury verdict issued last month, bringing the total judgment against Jones in the lawsuit to $1.44 billion.

“The record clearly supports the plaintiffs’ argument that the defendants’ conduct was intentional and malicious, and certain to cause harm by virtue of their infrastructure, ability to spread content, and massive audience including the infowarriors,” Bellis wrote in a 45-page ruling on Thursday.

The punitive damages comprise roughly $150 million for violations of the Unfair Trade Practices Act, and $323 million in attorney fees and costs for the plaintiffs. Bellis on Wednesday ordered Jones to not move any of his assets out of the United States, ruling at the request of the plaintiffs, who allege that Jones is trying to hide his assets to avoid payment. The plaintiffs are seeking to attach his holdings to secure money for the damages.

Plaintiffs in the case were relatives of 20 children and six staff members who were killed in the 2012 shooting by 20-year-old Adam Lanza. The plaintiffs said Jones should pay the maximum penalty available, adding that parents of the murdered children had encountered years of threats and harassment due to his claims.

The Infowars host had for years repeatedly said that the Sandy Hook mass shooting was staged by “crisis actors” as part of a government plan to enact more gun control. He has since acknowledged the shooting took place admitted that his claims were a mistake, noting that he didn’t do it on purpose.

On Thursday, Jones called Bellis’s order “ridiculous” and a “joke,” adding that he has little money to pay the damages. He also said he has only a “couple hundred thousand dollars” in his savings account.

“Of course I’m laughing at it,” he said. “It’d be like if you sent me a bill for a billion dollars in the mail. Oh man, we got you. It’s all for psychological effect. It’s all the Wizard of Oz … when they know full well the bankruptcy going on and all the rest of it, that it’ll show what I’ve got and that’s it, and I have almost nothing.”

Meanwhile, Jones was also ordered to pay $965 million in compensatory damages under a retainer agreement, and lawyers for the Sandy Hook plaintiffs are set to receive one-third of this amount. Jones has said he won’t pay the $965 million verdict.

Jones has also requested Bellis to order a new trial, or to reduce the compensatory damages to a “nominal” amount.

Christopher Mattei, an attorney for the plaintiffs, said Bellis’s ruling on Thursday “serves to reinforce the message of this case: Those who profit from lies targeting the innocent will face justice.”

“The Court recognized the ‘intentional, malicious … and heinous’ conduct of Mr. Jones and his business entities,” Mattei said in a statement.

Last year, as part of the lawsuit, Bellis found Jones and Infowars’ parent company liable for damages without a trial in an unusual “default” ruling. She said the ruling was because he had repeatedly failed to turn over many financial documents and other records to the plaintiffs. But Jones contended that he had submitted thousands of documents and that Bellis’s default ruling took away his right to present a defense in the lawsuit. The default ruling meant the jury only had to decide on how much in compensatory damages should be paid, and whether punitive damages should be paid.

In a separate trial in Texas, Jones was ordered in August to pay nearly $50 million to parents of a child victim in the shooting.