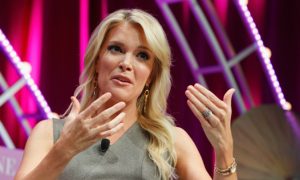 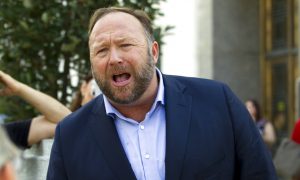 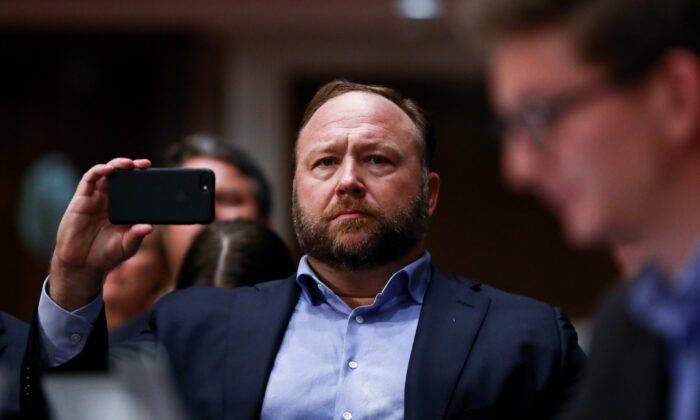 InfoWars founder Alex Jones takes photographs at a hearing to examine foreign influence operations' use of social media platforms before the Intelligence Committee at the Capitol in Washington on Sept. 5, 2018. (Samira Bouaou/The Epoch Times)
US News

InfoWars founder Alex Jones has been ordered to pay $100,000 to the plaintiff in a defamation case.

Four cases have been brought against Jones in Texas by parents of children killed in the mass shooting that took place in 2012 at Sandy Hook Elementary School in Newtown, Connecticut. Jones has previously claimed the shooting was a hoax set up by the government.

Travis County Judge Scott Jenkins granted a motion this month for legal fees from plaintiff Neil Heslin, whose 6-year-old son was killed in the shooting, and ordered Jones and InfoWars to pay $65,825, according to The New York Times.

In another ruling issued on Dec. 20, Jenkins denied a motion to dismiss the case and ordered the parties to pay tens of thousands of dollars more, adding up to about $100,000.

Jenkins said Jones and his lawyer ignored a court order in October to produce witnesses and materials to Heslin and said the defense’s failure to cooperate “should be treated as contempt of court.”

Heslin, in his suit, argues Jones and InfoWars defamed him by calling his description of his son’s death a lie.

“Mr. Jones is learning that he cannot treat the courts with the same contempt he showed my clients,” Mark Bankston, Heslin’s lawyer, told the paper. “In disobeying court orders, Mr. Jones has shown how desperate he is to ensure nobody finds out how InfoWars really operates, or the lengths the company went to carry out its five-year campaign of malicious harassment against these parents.”

InfoWars didn’t immediately respond to a request for comment.

Heslin’s team published a video earlier this month showing InfoWars editor-at-large and YouTube personality Paul Joseph Watson in a deposition saying he’d warned the media company not to get involved with conspiracy theorists who were “not credible.”

According to Jones’s deposition, he couldn’t say what the source was for the claim that the shooting was a hoax. He answered “I don’t remember” or “I don’t know” 95 times.

Jones in the deposition said he had something akin to a “form of psychosis” that made him question everything.

“I, myself, have almost had like a form of psychosis back in the past where I basically thought everything was staged, even though I’ve now learned a lot of times things aren’t staged,” Jones said in the deposition. “So I think as a pundit, someone giving an opinion, that, you know, my opinions have been wrong, but they were never wrong consciously to hurt people.”

Jones said media and corporations “lying so much” caused him not to trust much.

“Kind of like a child whose parents lie to them over and over again,” he said.

“So long before these lawsuits I said that in the past I thought everything was a conspiracy and I would kind of get into that mass groupthink of the communities that were out saying that. And so now I see that it’s more in the middle,” Jones said in the deposition. “So that’s where I stand.”