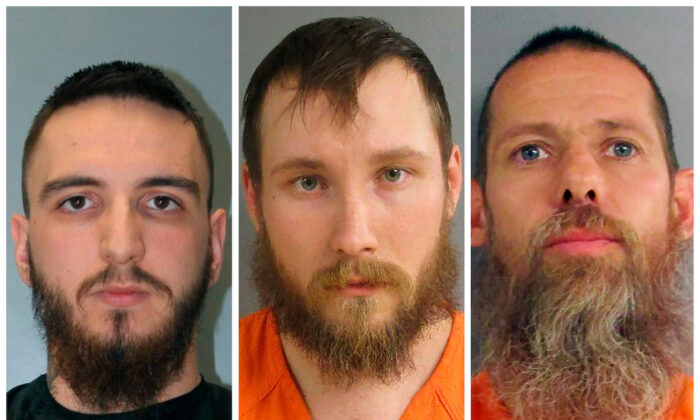 Paul Bellar (L), Joseph Morrison (C), and Pete Musico (R), who are accused of being involved in a plot to kidnap Michigan Gov. Gretchen Whitmer over her CCP virus restrictions. (Jackson County Sheriff's Office via AP)
US News

Judge: No FBI Entrapment for 3 in Gov. Whitmer Kidnap Plot

A judge ruled Tuesday that three men charged in a plot to kidnap Democratic Michigan Gov. Gretchen Whitmer before the 2020 election were not entrapped by the FBI.

They are accused of providing materials to support terrorist acts, attempting to commit a felony as an associate or member of gang, and gun charges.

They are accused of aiding six others who are charged in federal court with conspiring to kidnap Whitmer, including two men who pleaded guilty and four who are scheduled to stand trial March 8 in Grand Rapids. Five more are also charged in state courts. The FBI said it broke up a plot.

“This ruling makes clear these defendants were not pressured by law enforcement into committing these crimes,” Michigan Attorney General Dana Nessel said in a statement. “These were very serious threats to our elected officials and the public, and the perpetrators of these crimes must be held accountable.”

Investigators have described Morrison, Bellar, and Musico as anti-government extremists who were angry over coronavirus policies and restrictions imposed by the governor during the first year of the COVID-19 pandemic.

According to a court affidavit, Musico and Morrison are founding members of the Wolverine Watchmen, which authorities described as “an anti-government, anti-law enforcement militia group.”

An FBI informant identified Monday in court only as “Dan” testified about his communications and conversations with the defendants. Defense attorneys said some of their clients’ activities were initiated by the informant who was controlled by the FBI.

Wilson said he found no basis for entrapment.

“I just cannot, in reviewing this matter, (see) that the government … somehow pressured any one of these individuals to participate in anything, or to get in line with this way of thinking,” Wilson said, referring to ideology espoused by the Wolverine Watchmen. “That was the very reason that we got the confidential informant in the very beginning was as soon as he had joined the group and learned that they were talking about harming police officers and potentially politicians that he contacted the FBI because of his concern out of what potentially could happen.”

“They asked him if he would reconsider,” Wilson said. “He did.”