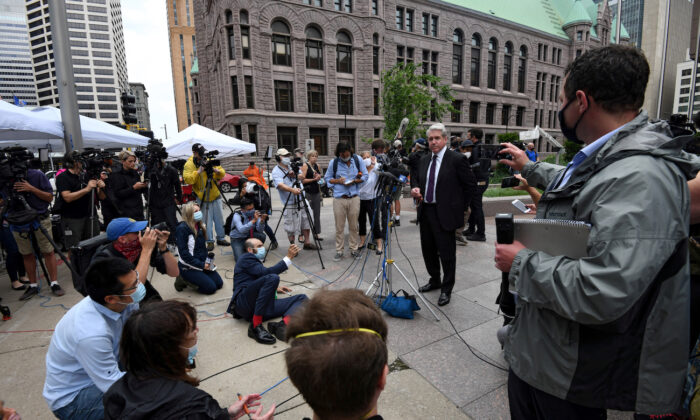 A Minnesota judge on July 21 removed a gag order against the four former police officers charged in the death of George Floyd.

Hennepin County District Judge Peter Cahill initially issued the order earlier this month, saying at the time that publicity before trial would make it hard to find an impartial jury and could result in an unfair trial. The gag order prohibited parties from speaking publicly about the case and restricted access to case records.

However, during a hearing on Tuesday, Cahill said his July 9 order “didn’t work” as intended. He said he made the decision to lift the gag order after attorneys for the former officers submitted motions arguing that it is both unfair to their clients, and limits their ability to defend them from negative publicity.

“The gag order didn’t work,” Cahill said, reported the Minneapolis Star Tribune. “If anything it may have exacerbated the issue.”

Cahill said that he still expects all lawyers in the case to follow the rules on disclosure of information. He also said he would consider a news media coalition’s request for recordings from the officers’ body cameras to be made more widely available.

Currently, the public can only access the body camera footage by appointment.

J. Alexander Kueng and Tou Thao, the other two officers, are also facing two charges each of aiding and abetting.

Earlier this month, Cahill set a March 8 trial date for the former officers if they are tried together, though he said he expects motions to be filed to separate their trials. If they’re tried separately, those still in custody would most likely go first. The next court date is Sept. 11.

The defendants have not entered pleas. Chauvin’s attorney has not commented publicly on the charges, while Lane’s and Kueng’s attorneys have sought to minimize their clients’ roles and deflect blame to the more senior Chauvin in Floyd’s death.

During the Tuesday hearing, Cahill also ruled that lead prosecutor, Minnesota Attorney General Keith Ellison, would not be held in contempt, as two defense attorneys requested, after he released a statement announcing that additional attorneys would help with the prosecution.