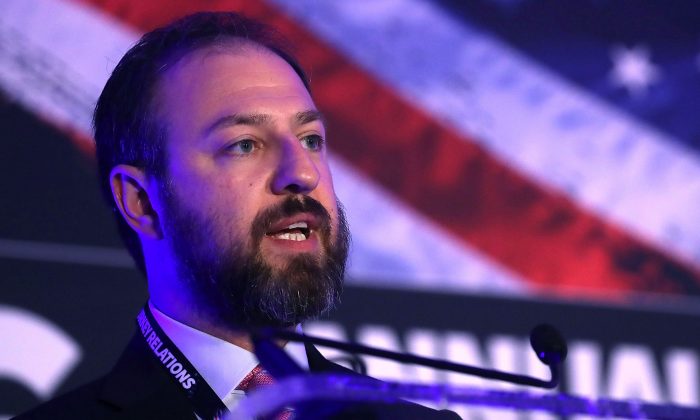 Ekim Alptekin, chairman of the Turkey-U.S. Business Council, during the 36th Annual Conference on U.S. Turkey Relations at the Trump International Hotel, in Washington on May 22, 2017. (Mark Wilson/Getty Images)
Politics

ALEXANDRIA, Va.—One of the last cases investigated by former special counsel Robert Mueller appeared to be on the brink of getting thrown out by a federal judge on July 18. Ultimately, District Judge Anthony Trenga allowed the case to continue—albeit with reservations—saying the charges rested on “very circumstantial” and “speculative” evidence.

The case alleges that Bijan Rafiekian, former partner in Gen. Michael Flynn’s lobbying firm, and Ekim Alptekin, a Turkish businessman, conspired to lobby in the United States on behalf of Turkey without disclosing it to the U.S. government. Only Rafiekian is standing trial, since Alptekin doesn’t live in the United States.

The defense argued that the case was too weak, only showing that Rafiekian acted in concert with Flynn and Alptekin, but not that the intent of the effort was to secretly lobby for Turkey. The jury would have to speculate to reach a verdict, one of Rafiekian’s lawyers said, invoking Rule 29, which directs federal judges to toss a case when the evidence presented by the government “is insufficient to sustain a conviction.”

The lobbying in question involved an op-ed published under Flynn’s name in The Hill on Nov. 8, 2016, about an Islamic cleric living in exile in Pennsylvania named Fethullah Gulen, who runs a group that Turkish President Recep Tayyip Erdogan blamed for an attempted 2016 coup.

Flynn’s now-defunct lobbying firm, Flynn Intel Group (FIG), was paid more than $500,000 by Alptekin to run a lobbying campaign against Gulen. When FIG’s lawyers were preparing the lobbying forms, Rafiekian, Alptekin, and Flynn all told them that the op-ed was unrelated to the lobbying job.

The prosecution disagreed, pointing out, among other things, that Rafiekian had sent a draft of the op-ed to Alptekin before publication with the message: “A promise made is a promise kept.”

Alptekin, former chair of the Turkey-U.S. Business Council, is known to have ties to Turkish President Recep Tayyip Erdogan and consulted the lobbying job with Turkish officials. The prosecutors, however, failed to establish that Turkey actually paid for the job.

The Foreign Agents Registration Act (FARA) requires registration in cases where lobbying “principally benefits” a foreign government or political party even if the party or government didn’t pay for the job.

Trenga, in the end, reserved his judgment on Rule 29, which means that even if the jury returns a guilty verdict, the judge can still go back and toss the case.

Flynn, a former national security adviser to President Donald Trump, wasn’t charged in the case as part of his November 2017 plea deal, in which he admitted to one count of lying to the FBI on unrelated matters and agreed to cooperate with the government. He’s expected to receive a low sentence, including no prison time, although he’s repeatedly asked for the sentencing to be delayed since he was still expected to testify on the Rafiekian case.

Flynn then unexpectedly stirred the pot last month when he fired his lawyers—the same lawyers who did the lobbying paperwork for his firm. His new team includes Sidney Powell, a former federal prosecutor and a critic of Mueller.

Later that month, the Mueller team asked Flynn to testify that he signed the lobbying forms knowing that there were intentionally made false statements in them. He refused, saying he only acknowledged the falsities with hindsight, but wasn’t aware of them at the time.

“You are asking my client to lie,” Powell told Brandon Van Grack, one of Mueller’s main prosecutors, according to The Federalist’s Margot Cleveland.

In a “very heated” voice, Van Grack replied, “Be careful what you say … other people are listening in on this call.”

Shortly after, the Mueller team called off Flynn’s testimony and instead tried to label him a “co-conspirator” in the Rafiekian case. Trenga pushed back, saying the government has yet to prove there was a conspiracy, de-facto putting the co-conspirator matter on ice.

The prosecutors also had an FBI agent call and question Flynn’s son, who also worked for FIG. “The Agent persisted in trying to speak with him even after he said to call his attorney,” Flynn’s lawyers said in an earlier court filing.

It’s been speculated that the Mueller team offered an under-the-table deal to Flynn as early as 2017 so as to not involve his son in the case, in return for Flynn’s cooperation.

On July 11, the government designated Flynn Jr. as a witness in the case, although he wasn’t ultimately called to the stand.

Powell called the Mueller team’s actions a “retaliation” for Flynn’s refusal to say what they wanted him to.