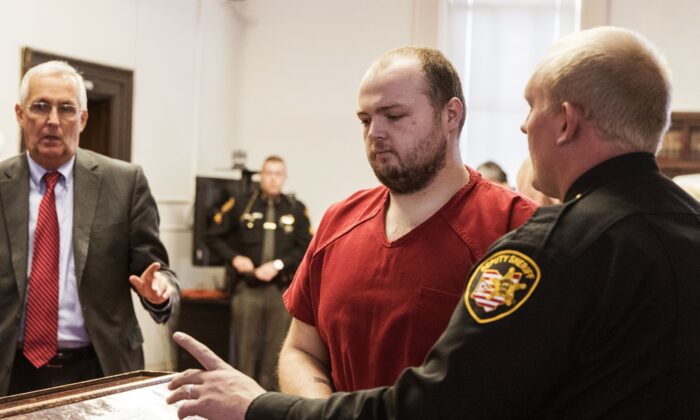 George Wagner IV, (C), is escorted out of the courtroom after his arraignment at the Pike County Courthouse, in Waverly, Ohio, on Nov. 28, 2018. (Robert McGraw/The Chillicothe Gazette via AP)
Crime and Incidents

An Ohio man charged with killing eight people from a single family lost his attempt Wednesday to have the most serious charges and the possibility of a death penalty thrown out.

Lawyers for George Wagner IV told a judge that the aggravated murder charges should be dismissed after Wagner’s brother, who pleaded guilty this year in the shootings, told authorities that his brother didn’t kill anyone.

George Wagner, his parents and his brother, Jake Wagner, were charged in the 2016 fatal shootings of the Rhoden family near Piketon in southern Ohio. Authorities say the shootings of seven adults and a teenage boy stemmed from a dispute over custody of a child Jake Wagner had with one of the victims.

George Wagner’s attorney said Wednesday he should not face the possibility of the death penalty after Jake Wagner admitted to killing five of the victims as part of a plea deal with prosecutors that spared him from being sentenced to death.

Jake Wagner also gave a detailed statement to authorities about the killings and agreed to testify against the other members of his family.

John Parker, an attorney for George Wagner, said that Jake Wagner told prosecutors that his brother did not shoot any of the victims.

“He did not pull the trigger once,” Parker said.

George and Jake Wagner’s mother, Angela Wagner, pleaded guilty in September to helping plan the slayings, and prosecutors said she gave them new information. In exchange, prosecutors agreed to drop aggravated murder charges against her.

Her plea deals also included an agreement to testify against George Wagner IV and his father, who has pleaded not guilty—if those cases go to trial.