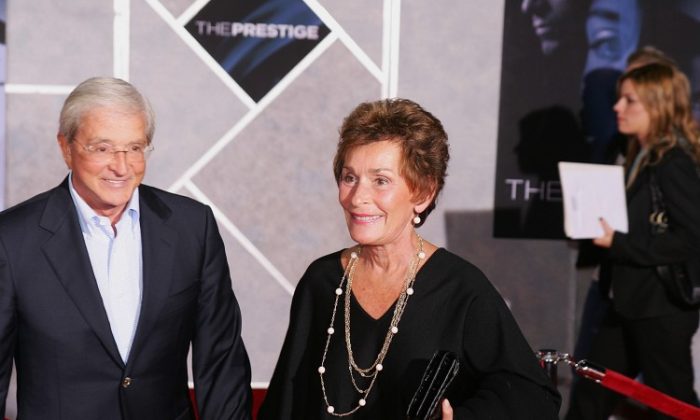 Judge Judy Sheindlin, star of the U.S. television court reality show "Judge Judy" is shown with a guest at a function in Los Angeles in 2008. (Robyn Beck/AFP/Getty Images)
US News

Judge Judy Changes Hairstyle for the First Time in Decades

The 76-year-old TV star has been known for her short-hair look, but in the spring, she now has a ponytail.

Petri Hawkins Byrd, the bailiff on her show, wrote on Instagram: “Alright, alright! I tried to stay out of this, y’all won’t let me! I prefer my boss with the old ‘do’ (left) More sophisticated and ‘Judy’cial. Just my opinion, not law!”

One person said on the social media website, “I love my JJ without the ponytail.”

Another chimed in, “I think she looks lovely either way.”

Judy Judy has a new do and I dont know how I feel about it. pic.twitter.com/dv1H18flzk

Breaking: @JudgeJudy changed her hairstyle! To a little ponytail! (Also, I may or may not dvr Judge Judy.) pic.twitter.com/KrviiIQb5J

Judy hasn’t made an official statement about her new look.

Last year, it was reported that the famed TV judge, whose full name is Judy Sheindlin, may be the highest-paid star on TV. According to Forbes, she made $147 million in 2017.

“Because it takes so long to build such a loyal, large audience, it isn’t surprising that the list of Highest-Paid Talk Show Hosts does not vary much year-to-year. Still, new gigs can lead to a pretty big cash jump. Ryan Seacrest, who cohosts “Live with Kelly and Ryan,” saw his earnings leap from $58 million to $74 million this year thanks to his eight-figure check for hosting the revived American Idol. DeGeneres’s income also climbed thanks to a $20 million check from Netflix for a single stand-up special,” said Forbes.

Plaintiff Gina Paradeza starts detailing the items she had in her purse before it was stolen, including an earpiece.

The man calls her a liar and said, “There was not an earpiece there, ma’am,” effectively incriminating himself.

It leaves everyone, including Judge Judy, stunned.

“For the people who don’t get this. The guy self-incriminated himself by saying there was no earpiece in the wallet, confirming he stole it,” said one person in the comments section.

Added another, “He snitched on himself.”

“It would be funnier if the guy on his left slap the back of his head,” said another.

Another wrote, “Ladies and gents, this is why you should educate yourselves.”

“Those two dudes will be dead before 30,” another person commented.

“I think the reason why Judy says I love it. Is because it made her job … very easy and simple,” wrote another.

According to Cornell University, self-incrimination “may occur as a result of interrogation or may be made voluntarily,” which is detailed under the Fifth Amendment of the U.S. Constitution.

“The Fifth Amendment of the Constitution protects a person from being compelled to incriminate oneself. Self-incrimination may also be referred to as self-crimination or self-inculpation,” according to the law school.