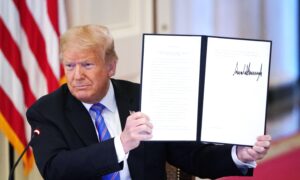 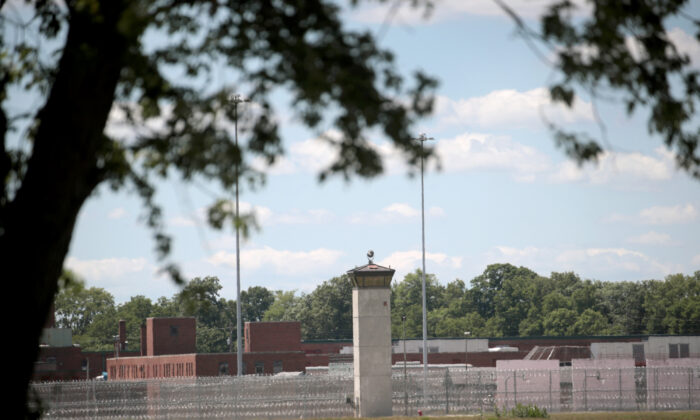 A guard tower sits along a security fence at the Federal Correctional Complex in Terre Haute, Ind., on July 13, 2020. (Scott Olson/Getty Images)
US News

A federal judge, for a second time this week, has blocked the Trump administration from resuming federal executions, delaying the administration’s second execution from proceeding just hours before it was scheduled to take place.

U.S. District Court Judge Tanya Chutkan granted a preliminary injunction to Wesley Ira Purkey, who was set to die by lethal injection July 15 at a federal prison in Indiana. Lawyers for Purkey, 68, who was convicted in 2003 of the rape and murder of a 16-year-old girl, objected to his execution, arguing that he suffers from dementia and schizophrenia, making him unable to understand his punishment.

Although the federal government has accused the court of “abusive delay,” Chutkan noted, it was her responsibility to try to resolve the claims of the inmates who were set to be executed this month and next month.

“The speed with which the government seeks to carry out these executions, and the Supreme Court’s prioritization of that pace over additional legal process, makes it considerably more likely that injunctions may issue at the last minute, despite the efforts of Plaintiffs’ counsel to raise, and the court to adjudicate, the claims in a timely fashion,” wrote Chutkan (pdf), an appointee of then-President Barack Obama.

She said the preliminary injunction was warranted because Purkey’s lawyers had “demonstrated a likelihood of success on his claim for a competency hearing” and that he would suffer irreparable harm if he wasn’t granted one.

In that case, the judge said the inmates still had pending claims that needed to be evaluated and that if the inmates weren’t granted injunctive relief, they would suffer irreparable harm.

She also reiterated that it wasn’t in the public interest to execute the inmates before they have had an opportunity to avail themselves of the legal process to challenge their executions.

“The court finds that the public interest is served by preliminarily enjoining Plaintiffs’ executions because it will allow judicial review of whether the United States Government’s planned execution protocol complies with federal law, and to ensure that it does so in the future,” she wrote in her order (pdf).

The Justice Department (DOJ) has filed an application to the Supreme Court to stay or vacate the injunction (pdf).

A separate temporary stay (pdf) on Purkey’s execution is currently in place in the 7th Circuit, which the DOJ has also asked the Supreme Court to set aside.

“He has long accepted responsibility for the crime that put him on death row,” one of Purkey’s lawyers, Rebecca Woodman, said in a statement to media outlets. “But as his dementia has progressed, he no longer has a rational understanding of why the government plans to execute him.”

That order was overturned by the Supreme Court hours later, making way for the federal government to carry out the execution. He was put to death hours later at FCI Terre Haute, a federal prison in Indiana.

In their 5–4 ruling, Supreme Court justices in the majority said plaintiffs didn’t establish that they were likely to succeed on the merits of their claim.

Using pentobarbital sodium to execute inmates doesn’t appear to violate the Eighth Amendment on cruel and unusual punishments, the justices said, pointing to five states using it for executions and the drug being utilized for more than 100 executions without incident.

Pentobarbital sodium “has been repeatedly invoked by prisoners as a less painful and risky alternative to the lethal injection protocols of other jurisdictions,” the justices wrote. The use was upheld by the Supreme Court in 2019 and by numerous courts of appeals.

“Against this backdrop, the plaintiffs cite new expert declarations suggesting that pentobarbital causes prisoners to experience ‘flash pulmonary edema,’ a form of respiratory distress that temporarily produces the sensation of drowning or asphyxiation,” the majority wrote (pdf).

“But the government has produced competing expert testimony of its own, indicating that any pulmonary edema occurs only after the prisoner has died or been rendered fully insensate. The plaintiffs in this case have not made the showing required to justify last-minute intervention by a federal court.”

This is story has been updated with additional developments Wednesday.