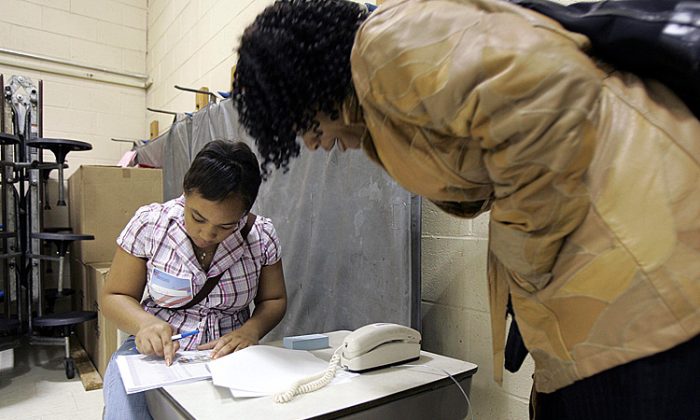 A poll volunteer (L) checks the ID of a voter during the last presidential election Nov. 4, 2008, in Cleveland, Ohio. A Commonwealth Court judge in neighboring Pennsylvania has ruled the state's new photo ID requirement should not be enforced for the upcoming November elections.(J.D. Pooley/Getty Images)
US

With five weeks to go before the presidential election, a judge has ruled that a key provision of Pennsylvania’s controversial new voter ID law will not be enforced in November.

Commonwealth Court Judge Robert Simpson ruled against the law on Tuesday. The six-month-old law was meant to prevent voter fraud, but opponents claimed it was intended to disenfranchise likely Democratic voters.

The court was asked to assess the actual availability of photo ID cards required by the new voter law, and whether a lack of availability of the cards would impact voters.

Judge Simpson ruled it would. “I’m still not convinced in my predictive judgment that there will be no voter disenfranchisement,” Judge Simpson said in his statement.

“I expected more photo IDs to have been issued by this time. For this reason, I accept Petitioners’ argument that in the remaining five weeks before the general election, the gap between the photo IDs issued and the estimated need will not be closed,” the judge stated.

The law required voters who did not have ID to cast a paper provisional ballot, which would then be validated by bringing a photo ID to county officials within six days of the election. Simpson excused them from that requirement.

For the November elections, registered voters without an ID may now vote on regular machines and not have to return to prove their identities.

Voters must have “liberal access” to the polls, Judge Simpson wrote, and provisional ballots can have the effect of disenfranchising people, and are not secret enough.
Due to such circumstances the judge issued the injunction. His decision could be appealed before the election.

The state legislature’s Republican majority was behind the law, aimed at curbing voter fraud. Pennsylvania House Majority Leader Mike Turzai created controversy when he said at a GOP event that the law “is going to allow Gov. Romney to win the state of Pennsylvania.”

He later clarified his statement, saying he meant that preventing voter fraud by requiring ID stops false votes from being counted.

Democrats, the ACLU, the NAACP, and voter rights advocates have said the law was passed with a partisan intent. But the key issue was whether it was easy or affordable for voters to get the free ID, which requires extensive documentation.

The August 2012 study “Who Can Vote?” by the student-run news project News 21 found that in-person voter fraud is too rare to require photo IDs.

Advocates praised the judges decision. “As the Commonwealth Court ruled, implementing a sweeping new voter ID law so close to an election would prevent eligible citizens from voting and having their say in our democracy,” Brennan Center for Justice Democracy Program Director Wendy Weiser said in a statement.

She added that the next step is making sure poll workers and voters know about the ruling so that no Pennsylvania voter is turned away due to lack of ID.

The named plaintiff in the Applewhite v. Commonwealth case is Viviette Applewhite, an elderly African American civil rights movement veteran who has been voting since the 1960s, yet was unable to get a voter ID.

A key swing state in the upcoming presidential election, Pennsylvania has 20 electoral college votes, and winning the state could determine the outcome of the election.