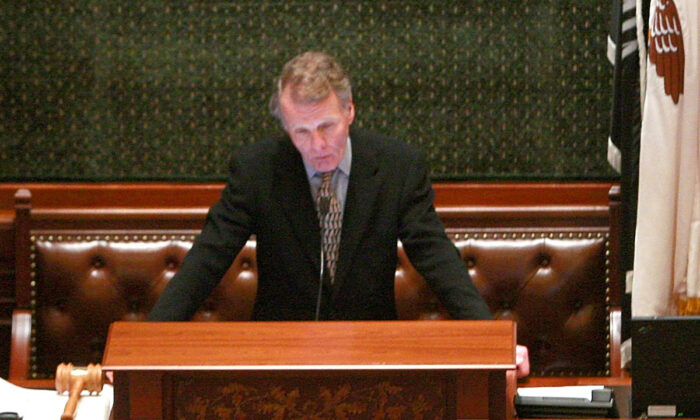 Speaker of the House Michael Madigan presides over The Illinois House of Representatives in Springfield, Ill., on Jan. 9, 2009. (Scott Olson/Getty Images)
Illinois

Judge John Robert Blakey said that, given the amount of material, he would allow attorneys for Madigan and co-defendant Michael McClain, a former lawmaker, ComEd lobbyist and close associate of Madigan, 120 days to review the documents.

Assistant U.S. Attorney Amarjeet Bhachu told the judge that federal prosecutors had recently sent out the first portion of their discovery materials, which he referred to as “quite voluminous.” He also said another “very voluminous” batch of materials would be sent to defense attorneys toward the end of April. Bhachu said he would expect the defense would need several months to review the materials.

“I would suggest 120 days as a reasonable amount given what I believe to be millions and millions of documents we are about to receive,” he said during Friday’s hearing.

Neither Madigan nor McClain participated in Friday’s status hearing, which was held by telephone.

Attorneys for Madigan and McClain will next be in court at 1 p.m. Aug. 2 for a status hearing in the case. The judge said neither defendant would need to appear in court at that time.

Federal prosecutors charged Madigan, 79, of 22 counts of corruption, including bribery, fraud, and racketeering. Madigan was one of Illinois’ most powerful politicians. Until 2021, he controlled what legislation moved through the Illinois House as speaker and the finances of the Democratic Party of Illinois as chairman of the party.

If convicted of the most serious felony charges, Madigan could face up to 20 years in prison.

The indictment also seeks the forfeiture of $2.8 million in alleged illegal profits from Madigan.

The charges stem from Madigan’s and McClain’s dealings with the state’s largest utility, ComEd, along with other businesses that had wanted to influence legislation in Springfield. ComEd is the only company identified by name in the indictment.

In 2020, federal prosecutors and Exelon subsidiary ComEd reached a deferred prosecution agreement. As part of the agreement, the utility admitted it paid $1.3 million in jobs and contracts to associates of Madigan over nine years to influence the former House speaker. ComEd agreed to pay a $200 million fine. A former ComEd official, Fidel Marquez, pleaded guilty to bribery charges in September 2020.

Prosecutors also allege that former Chicago Ald. Danny Solis agreed to help steer business to Madigan’s personal law firm, Madigan & Getzendanner, which specializes in challenging property tax bills for its clients. In exchange, prosecutors claim Madigan agreed to ask Gov. J.B. Pritzker to appoint Solis to a state board position that would pay $93,926 a year after Solis retired from the Chicago City Council. Solis is referred to as Alderman A throughout the indictment. Pritzker said last week he did not remember any such request from Madigan.

Solis, who represented Chicago’s 25th ward from 1996 to 2019, began cooperating with federal prosecutors in 2014, according to the 106-page indictment.

“I was never involved in any criminal activity,” Madigan said in a statement last month. “The government is attempting to criminalize a routine constituent service: job recommendations. That is not illegal, and these other charges are equally unfounded.”