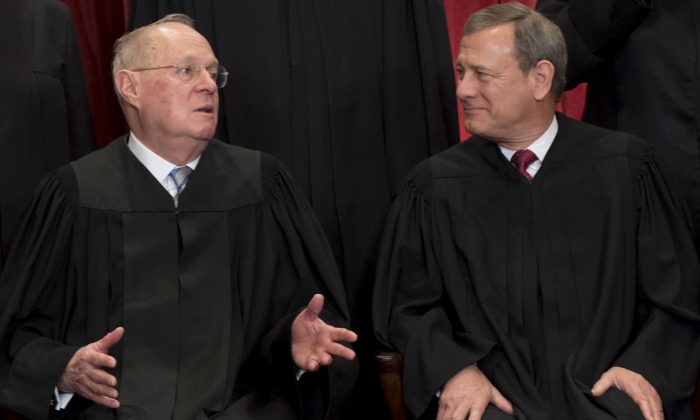 An 82-year-old American judge, Justice Anthony Kennedy, announced his retirement and the country is in uproar. It’s a catastrophe, the Left claims. One left-winger even says he wished Justice Kennedy had been shot instead of JFK or Robert Kennedy.

The President has a very clear mandate, one which he spelt out in his election campaign. This is not to nominate, as the Left claims, a conservative. This is to choose judges who don’t think, like Humpty Dumpty, that “When I use a word, it means just what I choose it to mean—neither more nor less.”

It was never intended the Supreme Court should  have the power to declare legislation invalid or to change the meaning of the constitution. The model the founders chose was influenced by the system of government then prevailing in the colonies and in England, where there was no such power. As analysed by Montesquieu, this model was based on a separation of the powers between the three branches of government.

In designing the Supreme Court, Alexander Hamilton noted that, as it would enjoy “no influence over either the sword or the purse,” it would be the “weakest” and “least dangerous” of the three branches.

Hamilton was not to know that some judges would never be satisfied with just applying the law. Judges have a way of letting the world know that they are going to seize a more powerful role. They just change the way they dress. We saw this in Australia in 1988, when, in association with a costume change, one judge even indicated a bill of rights could now be established by implication. The Americans witnessed this in 1801, when Chief Justice John Marshall ominously put aside his wig and red and ermine robes in exchange for an austere black gown.

Marshall not only changed his robes, he changed the constitution. This was in Marbury v. Madison where the court seized a power unprecedented in the world, the power to invalidate legislation based on their interpretation of the constitution.

President Thomas Jefferson was outraged by this, which he saw as “dangerous” turning the court into a “despotic branch.” He accused some judges of constantly “working underground to undermine the foundations of the constitutional fabric.” He warned they would now “twist and shape” the constitution into any form they pleased. Unfortunately, Jefferson has been proved to have been right.

But he must have frightened them, because it was only in 1857, in Dred Scott v. Sandford, that the court dared invalidate any other legislation. This proved to be an absolute  disaster. Not only did they hold that slavery was constitutionally protected, they also held that neither slaves nor their descendants could ever become citizens. Without doubt, this was a major cause of the Civil War.

And following the Civil War, the most significant decisions could hardly inspire confidence—approving  segregation, the forced sterilisation of the intellectually disabled and in the Second World War, the internment of US-born citizens merely because they were of Japanese descent. But legislation banning child labour was disallowed.

Then in the fifties, seemingly orthodox lawyers on the court had a late-life conversion into becoming the sort of radicals more often found among juveniles. So much so that when Dwight Eisenhower was asked what were the greatest mistakes of  his presidency, he replied “They’re both sitting on the court.”

The highlights of this era were the finding that the Bill of Rights included a right to abort and an obsessive search to ban any religious practice, however innocuous, both in schools and in public.

The justification claimed was that the constitution was  a ‘living document’ and the judges were elite oracles who, when staring into the penumbrae of the constitution, were uniquely endowed with the ability to see what was there.

To preserve this undemocratic aberration which results in radical legal change which could never get through the ballot box, and not be repealed by the legislature, the Left has turned the Senate approval process into a near-Bolshevik court. Here  every lie, every invention and every defamation is used not only to block a nomination but also to destroy the nominee and his family. One of the most appalling was when Senator Ted Kennedy, a man of many faults, killed off the nomination of a great judge, Robert Bork.

But when there was a last-minute attempt to block the black appointee, Clarence Thomas, by a charge of sexual harassment made by one Anita Hill, Ms Hill was at a complete loss to explain why she then followed him when he changed employment. Justice Thomas is still on the court, a considerable and respected constitutionalist.

Unlike other presidents, Donald Trump will not be easily put off. And he may have more opportunities during this and his likely second term.

No cabal of judges should ever have the power to change the Constitution unilaterally, either in the US or Australia. As we thankfully do not have a Bill of Rights, the problem is less intense here. But that has not stopped a long and unremitting judicial unravelling of our federation, which has led to enormous duplication and waste. One report to the premiers by respected experts estimates this to cost $160 billion, not once, but every year.

There is fortunately a long-term solution. The Swiss constitution specifically denies the Federal Supreme Court the power to review or invalidate federal legislation. This is because the power to initiate change in the constitution is vested where it should be in a democracy, with the people. The final decision is taken in a binding referendum

Both Americans and Australians should follow this by electing a convention for this purpose.

There is already a considerable  movement among American conservatives to do this to achieve major constitutional reform.

This article first appeared on The Spectator Australia