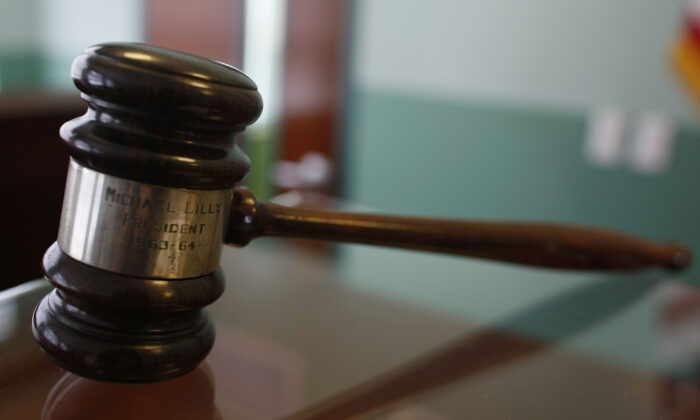 A judges gavel rests on top of a desk in the courtroom of the newly opened Black Police Precinct and Courthouse Museum in Miami, Fla., on Feb. 3, 2009. (Joe Raedle/Getty Images)
Crime and Incidents

CLEVELAND—A judge in Ohio has dismissed murder charges filed against the brother of Olympic gymnastics champion Simone Biles, ruling Tuesday that prosecutors did not present evidence to sustain a conviction in a 2018 New Year’s Eve party shooting in Cleveland that left three men dead.

Moments after Cuyahoga County Common Pleas Court Judge Joan Synenberg issued her ruling that acquitted Tevin Biles-Thomas, a woman in the court gallery charged at the defendant and screamed “You killed my baby!” Three sheriff’s deputies tackled the woman before she could reach Biles-Thomas.

Defense lawyers had sought the judge’s ruling, which also acquitted Biles-Thomas of voluntary manslaughter and felonious assault charges. They said there was no forensic evidence connecting their client to the killings and that no witnesses testified that they saw Biles-Thomas shoot.

Biles-Thomas, a U.S. Army soldier, has maintained his innocence. His first trial ended in a mistrial last month after jurors said they had read legal paperwork that inadvertently was included in evidence given to them to review.

Authorities have said gunfire broke out when a group of men arrived uninvited to the party in 2018. Nineteen-year-old DelVaunte Johnson, 21-year-old Toshaun Banks, and 23-year-old DeVaughn Gibson were killed.

Simone Biles has said on Twitter that she was struggling with her brother’s arrest and that her heart ached for the victims and their families.