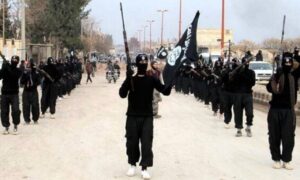 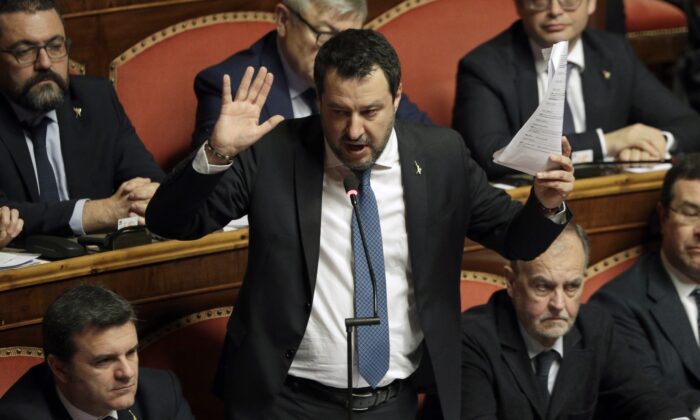 Then opposition leader Matteo Salvini speaks at the end of the debate at the Italian Senate on whether to allow him to be prosecuted, as he demands to be, for alleging holding migrants hostage for days aboard coast guard ship Gregoretti instead of letting them immediately disembark in Sicily, while he was interior minister, in Rome, Feb. 12, 2020. (Andrew Medichini, file/AP Photo)
Europe

MILAN—A judge in Sicily has dismissed a case against right-wing leader Matteo Salvini for keeping rescued migrants on board a coast guard ship in 2019, saying no crime had been committed.

Salvini had faced a possible indictment in the Sicilian port of Catania on charges of kidnapping for not allowing the migrants to disembark for five days that summer while he was interior minister.

Prosecutors had earlier recommended against ordering a trial, saying Salvini was carrying out government policy. Salvini defended his actions, adamant that other European Union nations must accept migrants who are trying to reach Europe and brought to Italian shores by rescue ships, and not leave Italy to manage on its own.

“It is a beautiful day, not only for me and my family, but for all Italians who want a controlled, regulated, and positive immigration, and not thousands of arrivals that in this post-COVID summer we cannot permit,” Salvini said on Italian private radio.

While the Catania case was dismissed, the leader of the right-wing League will face trial in the Sicilian capital of Palermo on kidnapping charges for failure to let a Spanish migrant rescue ship dock in 2019. The rescue ship, Open Arms, was kept at sea for days with 147 people saved in the central Mediterranean Sea. Trial is set to begin Sept. 15.

Italy this month is again seeing high numbers of arrivals on its southernmost island of Lampedusa. More than 2,100 people arrived over the weekend alone, as human traffickers took advantage of calm seas to launch often unseaworthy boats packed with migrants toward Italy.