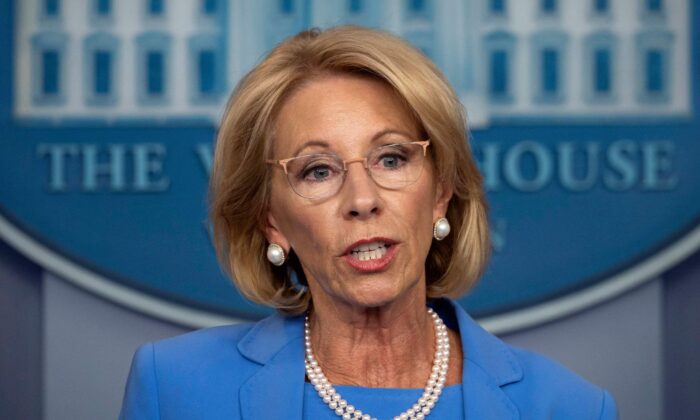 Secretary of Education Betsy Devos speaks during a White House briefing in Washington on March 27, 2020. (Jim Watson/AFP via Getty Images)
US News

DeVos announced the new Title IX rules in early May, which replaced an Obama-era civil rights directive that she revoked in September 2017. The new guidelines focus on guaranteeing those accused of sexual misconduct with due process protections, such as the presumption of innocence, live hearings, and cross-examination of the accusers. It also adopted a stricter definition of sexual harassment based on a 1999 Supreme Court decision.

The ACLU, on behalf of a coalition of survivor advocacy groups, filed the lawsuit in May in a Maryland federal court. The lawsuit challenges specific provisions, including the redefinition of the type of sexual misconduct that schools are obligated to investigate, limitation on the scope of Title IX to on-campus misconduct, and the new option for colleges to use a “clear and convincing” evidence standard for alleged victims.

In the Oct. 20 ruling (pdf), U.S. District Judge Richard D. Bennett held that the plaintiffs listed in the lawsuit lacked standing to sue. Bennett said Know Your IX, the leading plaintiff, “has not adequately alleged facts to establish its standing to bring this action.”

Bennett noted that in the complaint, Know Your Title IX alleged it received “a spike in training requests” from students in spring 2020 because the new rules reduces schools’ obligations to respond to sexual misconduct. However, the plaintiffs “have not provided any details about the number or nature of the pre-Rule requests, nor whether the alleged increase occurred as expected.”

“At this point, Know Your Title IX’s concerns about an increase in the number of calls and training requests that it will receive in reaction to the Rule are merely speculative,” Bennett wrote.

In August, the District of Columbia Circuit Court denied a request filed by 17 state attorneys general and the District of Columbia to halt the new Title IX rule, which was set to take effect on Aug. 14. Judge Carl John Nichols wrote in his ruling that the plaintiffs “have not established a likelihood of success on their claims, nor have they established that they are likely to suffer substantial irreparable harm pending further litigation.”

DeVos called the August ruling “a victory for students,” stressing that the rule would “support survivors of sexual misconduct without sacrificing important safeguards to protect free speech and provide all students with a transparent, reliable process.”