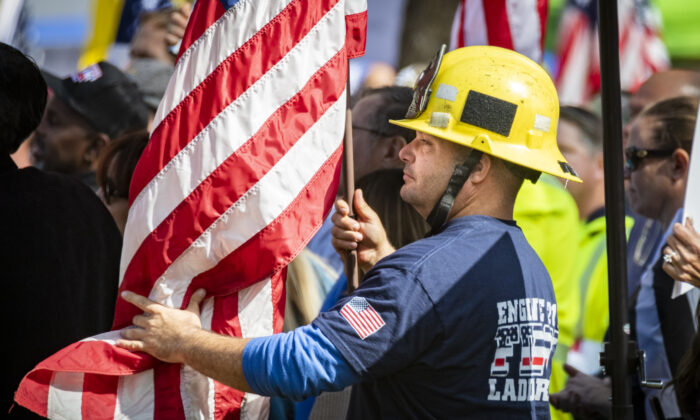 LOS ANGELES—A judge who previously denied a preliminary injunction sought by a group of Los Angeles firefighters—who sued the city regarding possible termination for refusing the COVID-19 vaccine—dismissed the lawsuit in its entirety.

Saying the balance of harms weighed against granting their request, Los Angeles Superior Court Judge Michael P. Linfield issued his preliminary injunction ruling on Dec. 21, a day after hearing arguments in the lawsuit filed on Sept. 17 by the nonprofit Firefighters4Freedom Foundation, which represents more than 500 members of the Los Angeles Fire Department.

The City Attorney’s Office on Jan. 18 filed a motion to dismiss the suit, with lawyers arguing in their court papers that it has been “well settled” under the U.S. Constitution for more than a century that compulsory vaccination is lawful.

“In fact, courts have consistently rejected challenges to COVID-19 vaccine mandates, such as the one at issue here,” the City Attorney’s Office wrote in its court papers.

In a tentative ruling issued Friday and finalized Tuesday, Linfield concurred with the city’s arguments.

“This is another in a long line of cases that challenges vaccination mandates,” Linfield wrote. “No court has upheld such a challenge. This case is equally without merit.”

City Attorney Mike Feuer noted that the ruling was the fourth victory obtained by his office against challengers of vaccine mandates since December.

“The overwhelming majority of our city’s first responders have protected themselves, their colleagues, their loved ones and our community by complying with the vaccine mandate,” Feuer said. “It’s time for everyone in the city family to step up. Cases are finally coming down. Getting vaccinated and boosted can help us continue this encouraging, and long overdue, trend.”

Firefighters4Freedom alleged that the city’s vaccination directive, among other things, violates their members’ constitutionally protected right to privacy.

In his court papers opposing the dismissal motion, Firefighters4Freedom attorney Scott J. Street stated that his clients were not challenging the vaccine ordinance on its face. He said the suit instead focused on the city’s decision, made several months later, to stop paying more than 100 city firefighters without a prior hearing—and action Street maintained was unconstitutional.

The firefighters’ suit “does not challenge the city’s determination that it navigated an emergency; rather [Firefighters4Freedom] essentially pleads that even during an emergency, due process equates to notice and a hearing before any adverse employment actions take effect,” the judge wrote. “This is not the law.”