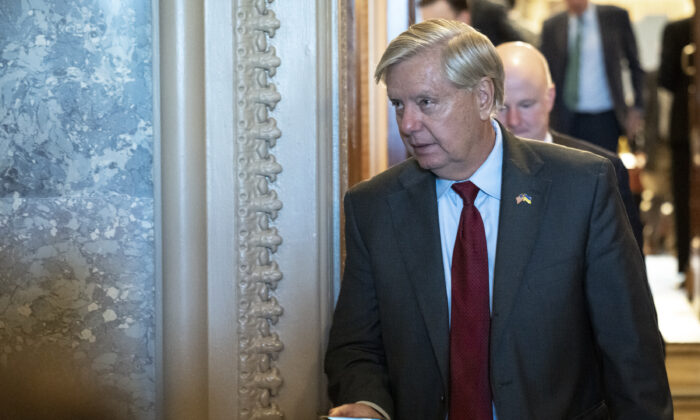 Sen. Lindsey Graham (R-S.C.) leaves the Senate Chamber after final passage of the Inflation Reduction Act at the U.S. Capitol in Washington on Aug. 7, 2022. (Drew Angerer/Getty Images)
US News

A federal judge has denied Sen. Lindsey Graham’s (R-S.C.) request to stay an order to appear before a special grand jury in Georgia investigating allegations of criminal misconduct related to the 2020 federal elections.

Graham’s lawyers attempted to argue that he was exempt from testifying because he’s a U.S. senator protected by the U.S. Constitution, including the speech or debate clause. But U.S. District Judge Leigh Martin May, an Obama appointee, disagreed and ordered Graham to honor his subpoena.

Graham’s attorneys appealed that order to the 11th U.S. Circuit Court of Appeals and asked May to stay her ruling and prohibit the special grand jury from questioning him while that appeal plays out.

May declined that request in her order on Friday.

“Under the circumstances, further delay of Senator Graham’s testimony would greatly compound the overall delay in carrying out the grand jury’s investigation,” May wrote in her decision (pdf).

Graham’s testimony is scheduled for Tuesday. But he still has another motion to stay May’s ruling pending before the 11th Circuit.

The senator told reporters in South Carolina earlier this week that he would appeal if the U.S. judge ruled against him.

“I was chairman of the Senate Judiciary Committee and had to vote on certifying an election. This is ridiculous,” he said. “We will go as far as we need to go and do whatever needs to be done to make sure that people like me can do their jobs without fear of some county prosecutor coming after you.”

Willis requested the special purpose grand jury to investigate alleged “attempts to disrupt the lawful administration of the 2020 elections in the State of Georgia.”

Fulton County Superior Court Judge Robert McBurney on July 11 ordered that Graham must testify because he “possesses unique knowledge” about certain phone calls and communications-related matters to what Willis alleges was a “multi-state, coordinated” effort to “influence the results of the November 2020 election in Georgia and elsewhere.”

Graham called the office of Georgia Secretary of State Brad Raffensperger, a Republican, at least twice in the weeks following the 2020 election, according to state officials. He sought a reexamination of mail-in ballots, among other issues.