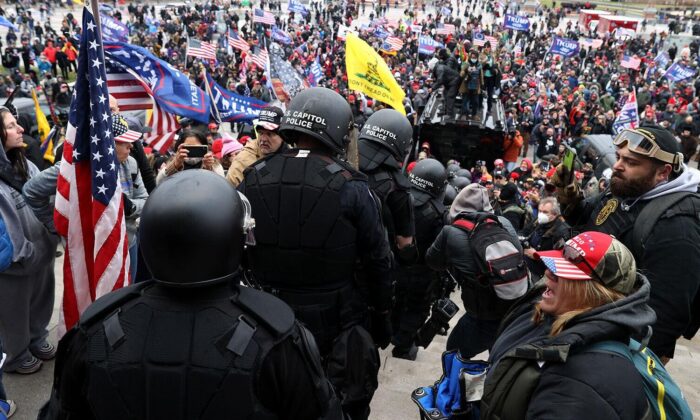 Photo showing Capitol Police being escorted down the Capitol steps through the crowd to safety on January 6 by members of the Oath Keepers. (Courtesy of Roberto Minuta)
US News

The trials of nine members of the Oath Keepers charged with seditious conspiracy and obstructing a government proceeding on Jan. 6, 2021, were moved back to Sept. 26 and Nov. 29 under a ruling issued by U.S. District Judge Amit Mehta in Washington on May 6.

During a May 6 status conference, Mehta agreed to a defense request to delay the trials by more than two months. The trials had been set for July 12 and Sept. 26.

Attorneys said a major motivation behind the request was to give them more time to sift through terabytes of video and other digital evidence made available by prosecutors. They also want more time to research a list of 80 “suspicious actors” and material witnesses observed on recently released videos from Jan. 6.

According to a May 5 court filing (pdf) by attorney Brad Geyer, a well-coordinated group of suspicious actors committed the same crimes the Oath Keepers are charged with and might have run an operation to entrap the Oath Keepers by luring them into the Capitol.

“Some of these eyewitnesses, based on objective video reviews only now made possible, seem to actively engage in crimes to which the Oath Keepers have been falsely accused, most occurring prior to any presence of the Oath Keepers and all of such without the knowledge or participation of the Oath Keepers,” reads a defense motion to delay the trials. “The video record that the defense team is unearthing is gradually confirming this theory.”

The nine Oath Keepers defendants are charged with seditious conspiracy to attack the Capitol on Jan. 6 and prevent the certification of Electoral College votes by a joint session of Congress. They are also charged with obstruction of a government proceeding and various other offenses that prosecutors contend were aimed at preventing the transition of power to President Joe Biden from President Donald Trump.

Defense attorneys wrote that a trial delay is necessary due to massive publicity surrounding the work of the U.S. House select committee investigating January 6. The committee has held hearings and taken testimony since July 2021. It has not issued a report. Attorneys said publicity surrounding the committee’s work could make it impossible for the Oath Keepers to receive a fair trial.

Although defense motions in recent weeks cited surveys showing a deep bias against Jan. 6 defendants among people in the potential jury pool, all requests for a change of venue so far have been denied.

Mehta said he can’t delay the trials indefinitely based on the issuance of a congressional report on the Jan. 6 unrest. He said if he agreed to the trial delay, he would not entertain another delay request “even if 435 members of Congress start reading from the report on the courthouse steps.”

Linder also complained of difficulty getting video-chat meetings with Rhodes, who is being held at the Alexandria City Jail in Virginia. A packet of legal papers addressed to Rhodes at the jail was rejected by the facility and returned to Linder’s office in Texas, he said.

Three members of the Oath Keepers have taken deals with federal prosecutors and pleaded guilty to the most serious charges against them: seditious conspiracy and obstruction of a government proceeding. Those offenses each carry a penalty of up to 20 years in prison.

Some case observers questioned why Oath Keepers Joshua James, Brian Ulrich, and William Todd Wilson would agree to plead guilty to the most serious charges when typical plea agreements drop the heaviest charges in exchange for an admission of guilt on lesser charges.

A Department of Justice letter sent to defense attorneys on May 2 might offer some insight into that question. Prosecutors Kathryn Rakoczy and Justin Sher wrote that if Oath Keepers defendants are convicted at trial, they could face life in prison under sentencing guidelines related to terrorism. A copy of the letter was obtained by The Epoch Times.

Federal judges rely on sentencing guidelines when determining the most appropriate penalties for criminal convictions. There is no guideline specifically for the seditious-conspiracy charge. The Department of Justice believes the “most analogous” sentencing guideline is for the charge of treason, the letter said.

The maximum penalty for a conviction for treason is death, according to Title 18 §2381 of U.S. Code.

The letter said if a defendant’s conduct is “tantamount to waging war against the United States,” the sentencing guideline recommends life in prison. Other seditious conduct would carry recommended sentence from 17.5 to nearly 22 years in prison.

Under such a scenario, an Oath Keepers defendant convicted at trial on a charge with a 20-year maximum prison term could be locked up for life.

The letter informed attorneys of the May 6 deadline to begin negotiating plea agreements. No other defendants asked for a plea offer from prosecutors.

William Miller, public information officer for the U.S. Attorney’s Office for the District of Columbia, declined to comment on the letter when contacted by The Epoch Times.