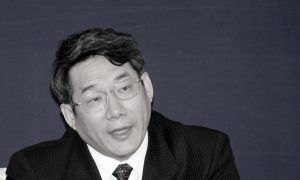 SOUTH BEND, Ind.—A judge is set to consider whether an Indianapolis man should be eligible for a life without parole prison sentence after a jury convicted him of murder, arson and conspiracy to commit insurance fraud in a home explosion that gutted a subdivision and killed two neighbors.

Leonard waived his right to have the jury decide whether to recommend the sentence of life without parole on the two counts of murder in the deaths of John “Dion” Longworth and his wife, Jennifer.

Defense attorneys said they filed a motion to have a sentence of life without parole dismissed because they don’t believe prosecutors have proven the necessary aggravating factors. Defense attorney John Shircliff said he would argue there’s no “legal basis” for the judge to impose the harshest penalty prosecutors were seeking.

Marion County Prosecutor Terry Curry said he believes Leonard will spend the rest of his life in prison no matter how Marnocha rules.

Shircliff also said the defense, which called only one witness during the trial, would appeal the verdict by referencing motions for mistrial that the judge denied.

Prosecutors alleged Leonard was the mastermind behind the explosion that damaged or destroyed more than 80 homes in Indianapolis, plotting with his then-live-in girlfriend Monserrate Shirley and his half brother Bob Leonard to blow up the home for $300,000 in insurance.

Bob Leonard is scheduled to go on trial on Jan. 19 on the same charges his brother faced. His trial is being moved to Fort Wayne because of extensive media coverage, the same reason Mark Leonard’s trial was moved to South Bend. Trials for two others haven’t been scheduled.

Shircliff said he wasn’t surprised by how quickly the jury reached a verdict.

“If the jury believed there was intent to commit insurance fraud and believed that part of that was to burn the house, all the other counts fell into place,” he said.

Longworth’s father, John, said he’s glad Leonard won’t be able to hurt anyone outside of prison but took no satisfaction in the verdict.

“When the thing you want most is to have your child back, nothing makes it better,” he said. “To me it’s sad to see anyone throw away their life. So this is a person who basically threw away their life, and that’s sad.”

Longworth, who attended every day of the trial, said he didn’t plan to attend the hearing Wednesday, saying for him the trial was over.