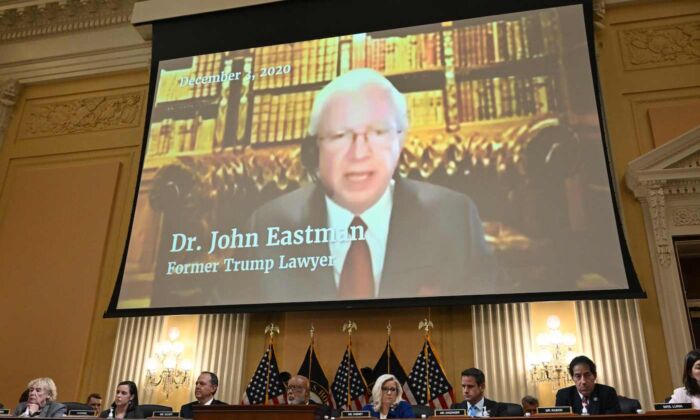 Former lawyer of former President Donald Trump, John Eastman, appears on screen during the fourth hearing by the House Select Committee to Investigate the January 6th Attack on the U.S. Capitol in the Cannon House Office Building in Washington, on June 21, 2022. (Mandel Ngan/AFP via Getty Images)
Jan. 6 Coverage

A federal judge vacated on Tuesday a scheduled hearing over a Trump attorney’s seized cellphone, despite the latter arguing that a search warrant may not actually exist.

John Eastman, one of the lawyers who had advised former President Donald Trump on alleged election issues during the 2020 presidential campaign and was therefore targeted by the Jan. 6 committee, said in June that the FBI seized his cellphone using what he claimed to be an “unlawful” search warrant. He later filed a motion in the U.S. District Court in New Mexico asking for the seized belongings to be returned. A hearing was set for next week.

The conservative lawyer is now challenging “the proffer” over the existence of another federal search warrant, which authorizes federal investigators to review the phone contents, including “a manual screen capture of certain contents of the device,” U.S. District Judge Robert Brack said in a new filing (pdf) issued on Aug. 30.

“Eastman does not accept the proffer regarding the warrant’s existence and believes that this creates a contested issue of fact,” the federal district court said. While the Department of Justice reaffirmed that it had obtained the second warrant on July 12, according to the document, the court finds that Eastman “cannot make a good faith argument that an evidentiary issue on the existence of a warrant remains.”

“With this in mind, the Court will vacate the hearing currently set for September 6, 2022,” Brack wrote, adding that the court will decide on Eastman’s motion based on written submissions from both parties.

Federal agents served an initial search warrant on Eastman on June 22 while he was leaving a restaurant, which allowed them to seize any electronic or digital device of his, including cellphones, iPads, USBs, and computers. The attorney was only given a copy of that search warrant without the supporting affidavit referenced in it.

Eastman argues that the initial warrant “does not describe with particularity the items to be seized, is overboard and provides no probable cause link to any criminal activity,” which violates his Fourth Amendment rights.

Ties with Trump have driven the lawyer, who also addressed the “Stop the Steal” rally in Washington on Jan. 6 last year, to hand over up to roughly 19,000 emails sent from his Chapman University email account to the House panel investigating the Jan. 6 Capitol breach, as a judge ordered.