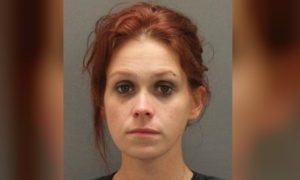 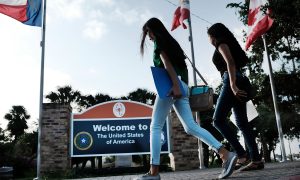 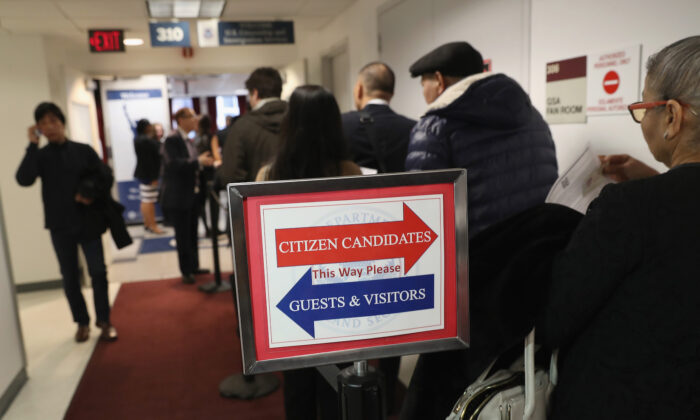 Immigrants wait in line to become U.S. citizens at a naturalization ceremony in New York City on Feb. 2, 2018. (John Moore/Getty Images)
US News

A federal judge in New York on Wednesday has blocked the Trump administration from enforcing its “public charge” immigration rule until the pandemic-related national emergency is over.

Judge George Daniels from the U.S. District Court for the Southern District of New York granted a preliminary injunction that blocks the federal government from implementing its rule during the length of the national public health emergency, which was declared in response to the CCP (Chinese Communist Party) virus pandemic.

It will consider a person a public charge if they receive at least one government benefit for more than 12 months in the aggregate in a three-year period.

The rule was subjected to a months-long legal battle that landed in the Supreme Court earlier in the year. The top court’s intervention came after the 2nd Circuit has refused to set aside nationwide injunctions issued by a New York District Court, prompting the Trump administration to file an emergency request (pdf) to the top court in January to lift those blocks.

The Supreme Court ruled to lift the injunctions, along with a separate injunction from Illinois, allowing the rule to take effect in February.

After an unsuccessful attempt to get the Supreme Court to temporarily halt or modify its order for the duration of the pandemic, three states—New York, Connecticut, and Vermont—and New York City, as well as several immigration groups continued to fight to block the rule in the district court.

They argue that it was necessary to temporarily halt the rule during the pandemic because they claim it discourages immigrants and their families from accessing health care and public benefits needed to prevent the spread of COVID-19, the disease caused by the virus, or mitigate the economic effects of the virus.

“The pandemic has drastically altered the nature and magnitude of the irreparable harms faced by Plaintiffs, their residents, and the nation due to the Rule and tipped the balance of the equities decisively in favor of granting injunctive relief while the COVID-19 emergency continues,” the states and groups argued in their complaint (pdf).

In their filing, the plaintiffs argued that the current global pandemic had significantly altered American society since two Supreme Court decisions. The CCP virus had thrown the country into an “unprecedented crisis” and “exacted a tremendous toll on the nation,” they said.

Daniels agreed with the plaintiffs saying that they had provided “ample evidence” that the rule deters immigrants from seeking testing and treatment for the virus, which in turn would impede efforts to mitigate the spread of the virus.

“Any policy that deters residents from seeking testing and treatment for COVID-19 increases the risk of infection for such residents and the public. Adverse government action that targets immigrants, however, is particularly dangerous during a pandemic,” he wrote (pdf).

The judge also said the Department of Homeland Security’s (DHS) attempt to address potential harms of the rule was “insufficient.”

The DHS posted an alert on the U.S. Citizenship and Immigration Services (USCIS) website on March 13, which stated that the agency would not consider testing, treatment, and preventative care related to COVID-19 when determining whether a person is a public charge in order to address concerns that immigrants fear public charge consequences.

The alert also stated that USCIS would need to consider the receipt of certain cash and non-cash public benefits including ones related to the testing or treatment of COVID-19 as part of a public charge determination for immigrants and nonimmigrants seeking an extension of stay or change of status.

“Any semblance of a mitigating effect that the alert has on the tangible harms caused by the rule’s general application may be wiped out at a moment’s notice. The uncertainty surrounding the scope of the alert’s coronavirus treatment exception further adds confusion and chaos,” the judge wrote.

New York Attorney General Letitia James called the ruling a “major victory to protect the health of our communities across New York and the entire nation,” in a statement on Twitter on Wednesday.