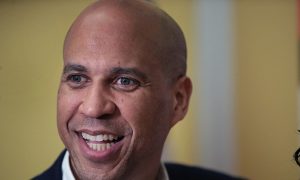 Sen. Booker Crosses Into Mexico to Help Escort Asylum-Seekers to US
0 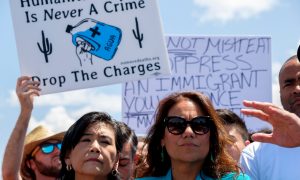 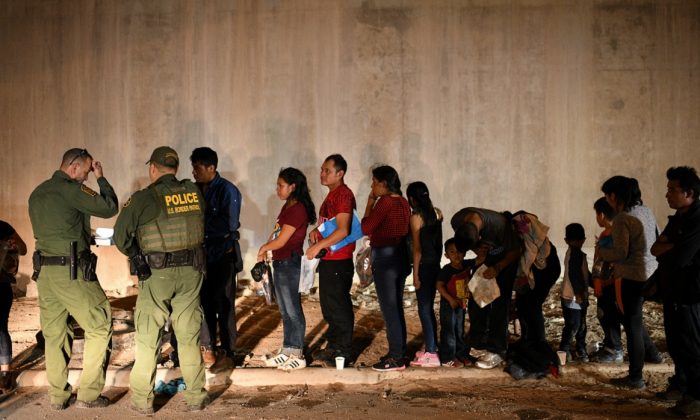 Illegal immigrant families turn themselves in to U.S. Border Patrol to seek asylum following an illegal crossing of the Rio Grande in Hidalgo, Texas, on Aug. 23, 2019. (Loren Elliott/Reuters)
Judiciary

A federal judge on Aug. 31 blocked a Trump administration policy that delegated authority to agents from U.S. Customs and Border Protection (CBP) to conduct credible fear interviews for asylum seekers.

Judge Richard Leon of the U.S. District Court for the District of Columbia granted a preliminary injunction that bars CBP agents from further conducting the interviews. In January, U.S. Citizenship and Immigration Services (USCIS) and CBP entered an agreement that delegated the power to agents on the front line of the border crisis.

Migrants applying for asylum due to credible fear must show that there is at least a 10 percent chance that he or she will be persecuted based on “race, religion, nationality, membership in a particular social group, or political opinion.”

A group of asylum seekers, who face imminent removal from the United States, sued the Trump administration after their negative credible fear determinations by CBP agents were upheld by immigration judges. They sought a temporary restraining order to prevent their removal and injunctive relief to block agents from conducting the interviews.

The asylum seekers—four mothers and their seven children from Honduras, Ecuador, and Mexico—seek to stay in the United States based on what they say are fears in their home countries of kidnapping, rape, torture, and murder by individuals who are connected to politicians or drug cartels. They argued that the agreement between the two agencies violates several federal laws, the due process clause of the Fifth Amendment, and the U.N. Convention Against Torture’s protection against refoulement.

In granting the preliminary injunction, Leon said the group had shown a likelihood of success of their claim that the use of CBP agents, who receive less training than USCIS asylum officers, violates the federal Immigration and Nationality Act.

Under the law, Congress requires asylum officers conducting such interviews to have comprehensive training on areas such as an applicant’s country conditions, asylum law, and interview techniques.

Meanwhile, the government argued that the CBP agents who conduct such interviews receive training that is consistent with USCIS prior training history and experience. The judge rejected that argument.

The judge said the agreement prevents any individual CBP agent from conducting credible fear interviews for longer than 180 days, which means CBP agents are unable to gain the necessary experience to appropriately apply asylum laws and regulations.

Leon also found that the asylum seekers would suffer irreparable harm if he didn’t grant the preliminary injunction.

Brianne Gorod, chief counsel of the Constitutional Accountability Center, one of the groups that filed the lawsuit on behalf of the asylum seekers, celebrated the ruling on Twitter.

“This admin has tried to hurt immigrants in so many ways, including by having law enforcement CBP agents conduct interviews that should be carried out by trained asylum officers from USCIS. @MyConstitution & @tahirihjustice challenged this policy in court, & #today we won!” Gorod wrote.

The Justice Department didn’t immediately respond to The Epoch Times’ request for comment.