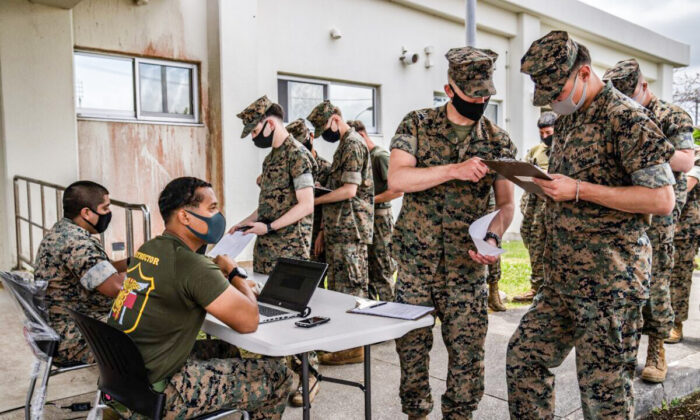 Hundreds of U.S. Marines who have had their requests for religious exemptions from the COVID-19 vaccine mandate denied by the military branch are safe from discharge for now, after a ruling on Aug. 18 by a federal judge.

The Marines have failed to adhere to the Religious Freedom Restoration Act, which requires the federal government to prove that a compelling governmental interest requires a certain action and that no less restrictive alternatives exist, U.S. District Judge Steve Merryday, a George. H.W. Bush appointee, ruled.

That includes rejecting the vast majority of religious exemptions using boilerplate language, despite many Marines being deemed by chaplains to hold sincere religious beliefs, and not offering compelling reasons to support vaccinating the minority of Marines who want exemptions.

“Although each appellate denial affirms that which no party disputes—that COVID-19 vaccination might promote to some extent the health and readiness of the force—no denial demonstrates that accommodating a particular applicant will meaningfully impede the health and readiness of the 95% vaccinated force or meaningfully impede the military’s operations and duties,” Merryday said.

According to an Aug. 4 update, 95 percent of the Marines are fully vaccinated, or have received a primary series of a vaccine. As of that date, just 11 requests for religious accommodation have been approved, after zero were approved before February.

Filings from the Marines fail to focus on the circumstances for each applicant and utilize data primarily from 2020 and 2021, before the emergence of the Omicron virus variant, which is weaker and more immune-evasive than earlier strains, the judge noted.

He certified a class action for all active-duty and reserve Marines who were affirmed by a chaplain as having a sincere religious objection, who filed for a religious exemption before the deadline, whose initial request was denied, and who filed an appeal on time.

The Marines are forbidden from discharging any member of the class and from retaliating against them.

“Our courageous U.S. Marines finally have relief from these unlawful COVID shot mandates,” Mat Staver, chairman and founder of Liberty Counsel, said in a statement. The group is representing the Marines in the case.

“The Department of Defense has relentlessly violated the law and ignored their religious freedom. Today, that lawlessness ends,” he added.

The branch has already discharged 3,299 Marines for refusing to get a vaccine, but it’s unclear how many of those had been denied an exemption. According to the recent update, 3,722 Marines who asked for religious accommodation were either denied or have not yet had their request adjudicated. Other Marines have asked for medical exemptions. Officials have approved 534 medical exemption requests.

All Exemptions for Retiring Marines?

The three exemptions granted in February were to retiring members. There are no signs the other eight have gone to members who are not retiring.

“The record presents no successful applicant other than a few who are due for retirement and prompt separation,” Merryday said.

Those who haven’t received an exemption are either awaiting separation, or are rapidly proceeding to an “inevitable denial, which would then put them on track to discharge.

“The pertinent history in this action reports that not for one Marine in continuing service (of course, a token one or five or ten Marines among the 3,733 applicants would not change the case)—not for one bookkeeper or for one inventory manager; not for one data analyst; not for one ‘jarhead’ who served abroad ‘in harm’s way’ throughout 2020 and 2021 during the height of the COVID-19 epidemic but without vaccination; not for a single Marine, no matter how young, strong, or gloriously healthy and not even if the Marine already contracted COVID-19 and recovered without material consequence—in not one case has the Marine Corps agreed to allow any accommodation, including any already-proven-successful health and safety protocol, to reasonably accommodate both the health and readiness of the Marine Corps and the sincere religious belief of a fellow Marine,” Merryday wrote.

“What to make of that?” he wondered, adding that “One searches without success for a wholesome hypothesis that both accounts for these facts and complies with the RFRA,” or the religious freedom act.

The treatment of the exemption requests signals that “the class of religiously objecting Marines is substantially likely to prevail on the merits of their claim that the Marines never received a fair and particularized evaluation ‘to the person,'” the judge wrote.

In a memorandum in opposition, government lawyers said that plaintiffs were relying “on anecdotes and non-probative statistics” to allege the treatment of religious objectors wasn’t adequately individualized, and that each member’s claim should be treated separately, not as part of the same class.

Merryday sided with the plaintiffs.

“Because the record reveals the substantial likelihood of a systemic failure by the Marine Corps to discharge the obligations established by RFRA, a classwide preliminary injunction is warranted to preserve the status quo, to permit the full development of the record without prejudice to the plaintiffs, and to permit both a trial and a detailed, fact-based resolution of the controlling issues of fact and law,” he ruled.