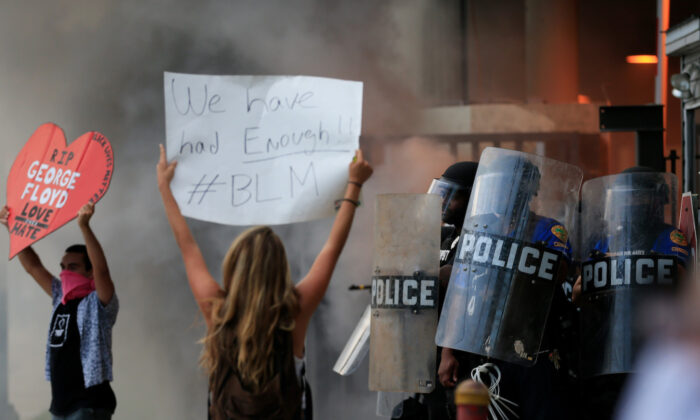 Police in riot gear face a protest outside a police station against the killing George Floyd on May 30, 2020, in Miami. (Cliff Hawkins/Getty Images)
Florida

U.S. District Judge Mark Walker on Sept. 9 didn’t rule the entire statute likely violated the U.S. Constitution, but found that the state legislature’s new definition of the word “riot” was too vague and confusing to satisfy free-speech rights guaranteed under the First Amendment.

“If this court does not enjoin the statute’s enforcement, the lawless actions of a few rogue individuals could effectively criminalize the protected speech of hundreds, if not thousands, of law-abiding Floridians,” the Obama-appointed judge wrote in a 90-page ruling that includes a three-page history of the civil rights movement in Florida dating back to 1956.

The so-called anti-riot measure, known as HB1, was signed into law by DeSantis on April 19. The Republican governor said at the time that it’s “the strongest anti-rioting, pro-law-enforcement piece of legislation in the country.”

The law increases criminal penalties for assault, defacing monuments, and vandalizing public property during riots. Local governments that interfere with law enforcement trying to contain violent demonstrations will be penalized.

The bill changed the definition of what a “riot” is in the state of Florida. Under the law, a riot is defined as a violent public disturbance involving three or more people acting with a common intent that causes damage to public property or injuries—or can cause imminent injury or damage.

The law also creates a new second-degree felony—“aggravated riot”—for any riot involving more than 25 people and resulting in grievous bodily harm or more than $5,000 in property damage. It would also apply if participants use or threaten to use a deadly weapon or block roadways by force or by the threat of force.

DeSantis said during the signing event in April that the left-wing idea of “defund the police” that echoed throughout Black Lives Matter demonstrations last year is an “insane theory” and is “not going to be allowed to ever carry the day in the state of Florida.”

Democrats and the American Civil Liberties Union (ACLU) have said that the law is designed to intimidate Black Lives Matter and related protesters. The ACLU and several other groups sued the governor, state Attorney General Ashley Moody, and others over the measure earlier this year.

DeSantis in a written statement said that he “vehemently” disagrees with the judge’s decision.

“But this case was always going to be decided by the 11th Circuit Court of Appeals,” the governor said. “There is a difference between a peaceful protest and a riot, and Floridians do not want to see the mayhem and violence associated with riots in their communities.”

The ACLU of Florida welcomed the decision in a statement shortly after the ruling, saying that the law “appears designed to target those who protest police violence.”

“We are glad the court has agreed to suspend enforcement of this key provision while we continue to advocate to ensure that protesters in Florida can safely exercise their right to speak out against injustice,” it said.

Meanwhile, DeSantis said during a press briefing on Sept. 9 that Florida would be appealing the decision.

“That’s a foreordained conclusion from that court,” DeSantis said, The Washington Post reported. “I guarantee you, we’ll win that on appeal.”