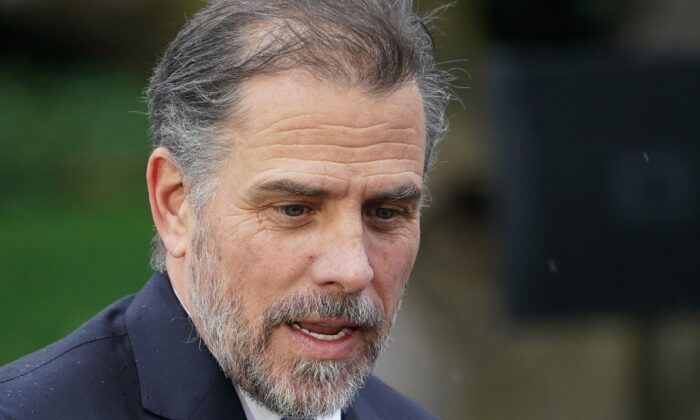 Hunter Biden, the son of President Joe Biden, during the annual White House Easter Egg Roll on the South Lawn of the White House on April 18, 2022. (Mandel Ngan/AFP via Getty Images)
US News

A U.S. agency seeking to not release possible records on a gun purchase made by President Joe Biden’s son received backing from a federal judge this week.

The Bureau of Alcohol, Tobacco, Firearms, and Explosives (ATF) doesn’t have to release the records, which are believed to include a form Hunter Biden submitted while purchasing a firearm in 2018, according to a Sept. 13 ruling from U.S. District Judge Rudolph Contreras.

An Ohio-based reporter named David Codrea asked the ATF in 2020 for all records related to the disappearance of a gun from a vehicle owned by Hunter Biden. He cited a story from The Blaze, and Politico later reported on the situation as well.

According to the media outlets, Hunter Biden’s gun went missing in Delaware in 2018 but no charges were brought and no arrests were made. ATF agents were said to have visited the shop from which Hunter Biden bought the gun and obtained a copy of the file on the purchase. Secret Service agents were also reportedly involved.

“Mr. Codrea requests copies of law enforcement and administrative reports, communications, correspondence, and work papers, including with internal State of Delaware DOJ, the Delaware State Police, any local law enforcement and any relevant federal agencies including ATF and the United States Secret Service,” a lawyer representing Codrea wrote in the Freedom of Information Act (FOIA) request to the ATF. “This includes any case handling instructions from overseeing administrative authorities and/or agencies that would explain why over two years later, there has still been no public report or explanation as to the way the case has been resolved and why.”

The ATF first sent a final response saying that it couldn’t locate any responsive records. But it later said the search “was an error because the subject of this particular records request is a third party and a private citizen,” noting that the request should have been denied under exemptions outlined in FOIA. The ATF also said it could reconsider if Cordea presented more information, which he did, arguing in part that the public interest outweighed Hunter Biden’s privacy interest.

ATF declined the updated request and an appeal was turned down, triggering a lawsuit.

Contreras, an Obama appointee, concluded that the ATF was correct.

He found that the agency’s citation of an exemption for records compiled for law enforcement purposes was adequate and that “Hunter Biden’s privacy interest is substantial” because not siding with the ATF would mean that the agency would confirm whether an investigation was conducted into Hunter Biden.

Another factor, the public interest—described as “significant”—wasn’t outweighed by the privacy interest, but it was a “close call,” the judge said.

He cited earlier decisions by the U.S. Court of Appeals for the District of Columbia Circuit, including People for the Ethical Treatment of Animals (PETA) v. National Institutes of Health et al.

Codrea wrote in an article that the judge disregarded evidence that indicates “Hunter Biden could not have legally purchased a handgun in Delaware without illegally denying documented controlled substance abuse on the Form 4473 Transfer Record, which is a felony.”

He said he likely wouldn’t appeal the decision.