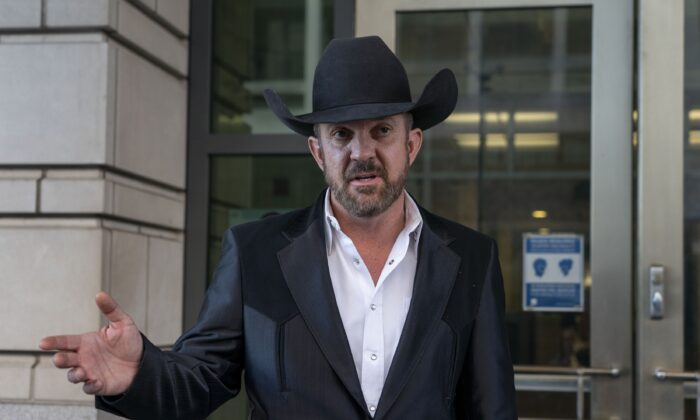 Otero County Commissioner Couy Griffin speaks to journalists as he leaves the federal court in Washington on March 21, 2022. (Gemunu Amarasinghe/AP Photo)
US News

Judge Bars Official Who Took Part in Jan. 6 From ‘Seeking or Holding’ Office

A judge in New Mexico has barred an official who was convicted for being on the grounds of the U.S. Capitol while it was breached on Jan. 6, 2021, from seeking or holding state or federal office, and removed the official from his position.

Mathew also concluded that the Capitol breach was “an insurrection against the U.S. Constitution” and that Griffin “engaged in” the insurrection when he entered restricted Capitol grounds.

Three New Mexico residents, represented by the Washington-based nonprofit Citizens for Responsibility and Ethics, had asked the court to bar Griffin from holding office.

They pointed to Section 3 of the 14th Amendment, which says that no person shall hold a federal or state office if they “having previously taken an oath … to support the Constitution of the United States, shall have engaged in insurrection or rebellion against the same, or given aid or comfort to the enemies thereof.”

Due to the breach constituting an insurrection and Griffin participating after taking an oath in support of the Constitution, Griffin was disqualified from holding a state or federal office as of the day of the breach, according to the new ruling.

“Mr. Griffin aided the insurrection even though he did not personally engage in violence,” Mathew said. “By joining the mob and trespassing on restricted Capitol grounds, Mr. Griffin contributed to delaying Congress’s election-certification proceedings.”

Griffin, who also founded a group called Cowboys for Trump, did not immediately respond to a request for comment. A phone call to the number listed for him on the Otero County website was not answered.

The two other Otero County commissioners did not immediately respond to requests for comment.

The Citizens for Responsibility and Ethics cheered the ruling, believed to be the first of its kind in over 150 years.

“This is a historic win for accountability for the January 6th insurrection and the efforts to disrupt the peaceful transfer of power in the United States,” Noah Bookbinder, president of the group, said in a statement.

Griffin was charged with disorderly conduct and entering a restricted area for his actions on Jan. 6, 2021. U.S. District Court Judge Trevor McFadden, a Trump appointee, acquitted Griffin of the first charge and convicted him on the second charge following a bench trial.

McFadden sentenced Griffin to a suspended jail sentence, 60 days of community service, and one year of supervised release for the misdemeanor.