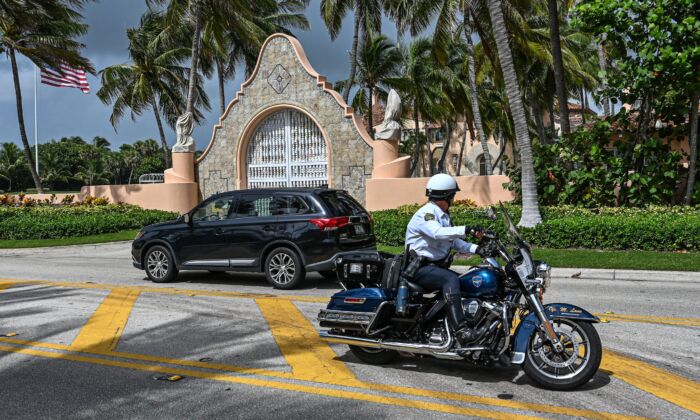 A federal judge in Florida has avoided ruling on whether to unseal a key document related to the FBI’s raid of former President Donald Trump’s resort, instead scheduling a hearing to hear arguments from parties in person.

Judicial Watch’s motion to unseal the search warrant affidavit and other materials, backed by a number of other businesses and groups, will be the subject of the Aug. 18 hearing at the federal court in West Palm Beach.

The nonprofit urged the court on Aug. 10, two days after the raid, to unseal the warrant, the affidavit, and related documents.

“Given the political context, and the highly unusual action of executing a search warrant at the residence of a former President and likely future political opponent, it is essential that the public understands as soon as possible the basis for the government’s action. Any government interest in securing the identities of witnesses and confidential sources, if any, may be addressed by appropriate redactions from the search warrant affidavit,” Judicial Watch said.

U.S. Magistrate Judge Bruce Reinhart unsealed the warrant itself and inventory receipts listing items agents seized from the resort, but has kept other materials shielded.

Among them: the affidavit, a document signed by a law enforcement official that argued for a warrant to be approved.

“It’s absolutely critical to get the affidavit. The affidavit is the foundation. It’s the predicate for the entire search warrant process,” Chris Farrell, director of research and investigation at Judicial Watch, told The Epoch Times in a recent interview.

The U.S. Department of Justice said the public interest in the case, among other reasons, warranted the unsealing of the warrant and the receipts.

Those documents showed that government officials think Trump may have violated three federal laws, including a law that prohibits destroying, altering, or falsifying certain records.

The government has resisted calls to make the affidavit public.

Lawyers for the government said in an Aug. 15 filing that keeping the affidavit shielded would “protect the integrity of an ongoing law enforcement investigation that implicates national security.”

While a redacted copy of the document could be released, “the redactions necessary to mitigate harms to the integrity of the investigation would be so extensive as to render the remaining unsealed text devoid of meaningful content, and the release of such a redacted version would not serve any public interest,” they also said.

Parties can file replies to the government’s filing by 9 a.m. on Aug. 18.

The hearing will start at 1 p.m. that day.

No remote access to the hearing will be enabled.