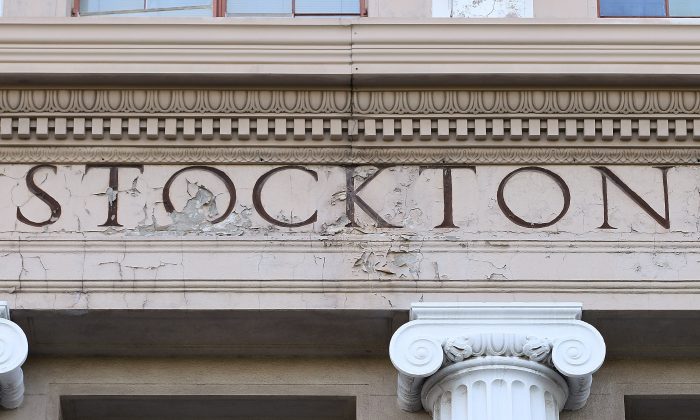 SACRAMENTO, Calif.—A judge on Thursday approved a plan by Stockton, California, one of the largest U.S. cities to declare bankruptcy, allowing it to eliminate more than $2 billion in long-term debt payments without touching its massive pension obligations.

Marking a critical development in the city’s financial recovery, U.S. Bankruptcy Judge Christopher Klein said Stockton can use the plan to exit the court’s Chapter 9 protection, which it sought in 2012. Klein’s ruling can be appealed.

“This plan, I’m persuaded, is the best that can be done in terms of restructuring an adjustment of the debts of the city of Stockton,” he said.

The city negotiated deals with all major creditors except Franklin Templeton Investments, which argued it was being treated unfairly. The investment firm said the city isn’t touching employee pensions but is asking the company to walk away from collecting nearly $32.5 million still owed.

“Obviously we are disappointed,” Franklin Templeton’s attorney, James Johnston, told the judge. “We will evaluate our next steps.”

Klein ruled earlier this month that bankruptcy law allows the city to treat pension obligations like any other debt, meaning the city could choose to trim benefits. Since filing bankruptcy, cityofficials said the already reduced employee pay and benefits. Cutting pensions would cause an exodus of workers, they said.

Johnston was not available after the hearing for comment, and the firm’s spokeswoman Stacey Coleman declined to elaborate in an email.

Elsewhere in California, Vallejo went through bankruptcy before Stockton. San Bernardino filed shortly after Stockton and has yet to present an exit plan.

Stockton City Manager Kurt Wilson said the lesson for other cities is to watch for the early signs of deep financial troubles and head them off before it’s too late. He said the city can now focus on providing services to residents, rather than waging the bankruptcy fight.

“This has been a very draining and ugly process,” Wilson said, adding that the city has restructured its debts to bond market investors through the year 2054.

The bankruptcy cost Stockton more than $13 million for attorneys and consultants.

Stockton’s leaders say the city was victimized by an unforgiving boom-and-bust economic cycle.

Before the recession, leaders spent millions of dollars revitalizing the downtown area with a newCity Hall and building a marina, sports arena and ballpark. The city issued about 3,000 permits annually to build new homes, and it paid police premium wages and health benefits.

With the recession, building dried up, and Stockton became ground zero for home foreclosures. Like many residents, City Hall couldn’t pay its bills. The city slashed millions of dollars from its budget and laid off 25 percent of its police officers. Crime soared.

Franklin Templeton argued that Stockton agreed to better terms with its other creditors, and that the city’s economic projections showed it could afford to eventually pay back most or all that it owed Franklin Templeton.

Stockton Mayor Anthony Silva said he was pleased with the ruling but it was not an occasion forcity officials to pat themselves on the back. The bankruptcy came at a great cost to retired cityemployees, who lost their health care benefits, current city workers and residents who had to live with a low level of services, the mayor said.

“I advise other cities to keep a close eye on your finances,” Silva said. “I wouldn’t wish bankruptcyon anybody else.”