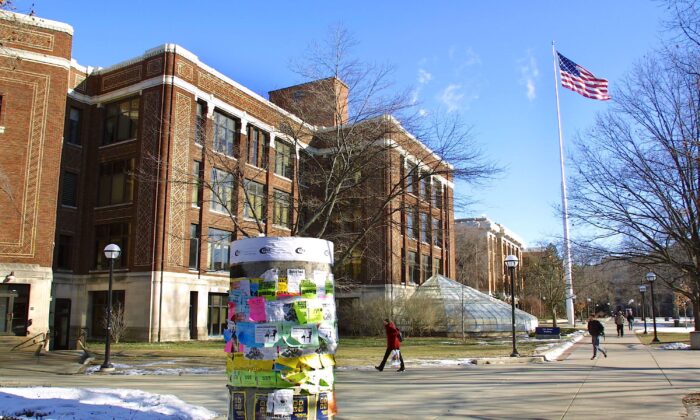 Students walk across the University of Michigan campus in Ann Arbor, Mich., on Jan. 17, 2003. (Bill Pugliano/Getty Images)
US News

A federal judge has signed off on a settlement that provides compensation to over 1,000 victims who claim to have been sexually abused by a former doctor at the University of Michigan.

The $490 million settlement was agreed in January. However, it took many more months for the final details of the agreement to be completed. The deal has received approval from 98 percent of claimants, the university said in a Sept. 16 news release. Six percent of the funds will be set aside for meeting claims by victims who step forward in the future.

The accused, Dr. Robert Anderson, worked at the university from 1966 to 2003. He died in 2008. During his time at the university, Anderson worked as director of the campus Health Service as well as served as physician for several sports teams.

The job brought him into contact with numerous students and athletes who claim to have been molested by him.

Anderson’s conduct only came to light in 2020, two years after a 1970s wrestler, Tad DeLuca, filed a complaint that led to a police investigation. Even more men came forward, followed by lawsuits.

“It’s been a long road,” Richard Schulte, a lead negotiator for Anderson’s victims, told The Associated Press. “I’m very happy for the survivors and glad I could get it across the finish line … The process is completely confidential, but we’re hopeful distribution should take place this fall.”

The university has no role in determining the distribution of funds. Archer Systems LLC was appointed by U.S. District Judge Victoria Roberts as the administrator of claims.

Paul Brown, chair of University of Michigan’s Board of Regents, offered a “heartfelt apology” and expressed hope that the settlement helps in the “healing process of survivors,” according to the news release.

In March 2020, the University of Michigan hired law firm WilmerHale to investigate the sexual abuse allegations against Anderson. In May 2021, the firm released the results of its investigation (pdf), concluding that during his 37 years at the University, Anderson engaged in sexual misconduct with his patients on “countless occasions.”

Anderson’s misconduct forced some athletes to quit their sports teams. It affected the academic performance of students, with some of them leaving the university.

Some students ended up questioning their sexuality while others sought counseling. The trauma caused by Anderson’s actions “persists to this day,” the reports states.

In 2014, the federal government investigated 55 universities for their handling of sexual abuse cases. The University of Michigan was one of them.