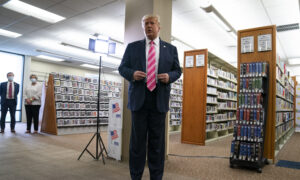 Pelosi 'Hopeful' on Stimulus as Negotiations Continue Into Weekend
0
Politics

A federal judge has allowed some Floridians who had their mail-in votes rejected to attest to their votes’ validity by 5 p.m. on Nov. 17 and have the votes counted.

U.S. District Judge Mark Walker ruled on Nov. 15 that some voters were denied the opportunity to validate, or cure, their rejected votes by the lawful deadline and thus deserve an exception.

These votes were rejected because the signatures on the ballots were determined by election officials to not match the voters’ signatures on record with the elections’ authorities.

Walker’s ruling came amid a machine recount of more than 8 million votes cast in Florida’s tight senator, governor, and agriculture commissioner races. The recount finished on Nov. 15, with candidates in the Senate and commissioner races separated by a margin of less than 0.25 percent, which triggers a hand recount. Only the commissioner race has a Democrat in the lead.

Who Is the Ruling For?

Walker, an Obama appointee, estimated about 5,000 ballots ended up rejected across the state for signature mismatches. But his ruling only pertains to “voters who have been belatedly notified they have submitted a mismatched-signature ballot.” It’s not clear how many of the “belatedly notified” there are among the rejected.

State law requires election officials to “immediately notify” voters with signature mismatches. The voters then can submit an affidavit affirming the ballot was indeed signed by them. The affidavits need to be submitted by 5 p.m. one day before the election.

The law, however, allows election officials to accept mail-in ballots that arrive by 7 p.m. on election day. If signatures on those late ballots don’t match the record they can’t be cured anymore since the deadline for the affidavits already passed. It was for voters who weren’t notified in time to cure their ballots that Walker allowed the deadline extension.

The ruling was celebrated as a “big victory” by Marc Elias, who brought the lawsuit on behalf of Sen. Bill Nelson (D-Fla.). The senator lost his reelection bid to Florida’s Republican Governor Rick Scott by about 12,600 votes, based on the recount figures, which slightly increased Scott’s margin.

“Today’s decision is a victory for the people of Florida and for the Nelson campaign as we pursue our goal of making sure every legal ballot is counted,” Nelson’s campaign said in a statement.

“The judge was clearly not pleased with the series of lawsuits Nelson and liberal D.C. groups have filed that ask him to rewrite the entire FL election code AFTER the election,” the campaign said in a statement. “Even with this morning’s limited decision (we’re confident will be overturned), it doesn’t bode well for the rest of the suits.”

Lawyers for Scott appealed the ruling to the 11th Circuit appeals court, which is split six-to-six between judges appointed by Democrats and Republicans. The appeal was denied, Elias said in a Nov. 15 tweet.

Also on Nov. 15, but in a separate suit of Nelson’s, Walker ruled against suspending deadlines for the recount, which was required by law to be completed by 3 p.m. on Nov. 15.

At least one of Florida’s 67 counties, Palm Beach, had its election supervisor saying it wouldn’t meet the deadline. Florida Circuit Judge Karen Giever on Nov. 13 postponed the deadline for Palm Beach until Nov. 20, Local10.com reported.

Meanwhile, Nelson’s campaign said on Nov. 15 it had sued Florida election officials seeking a hand recount in Palm Beach “due to systematic machine failure during the machine recount.”

Palm Beach County officials said the machines they were using to recount ballots overheated, which forced them to redo a day’s worth of recounting.

While Nelson protested Florida’s deadline for curing mail-in ballots, his party seems to have misled some voters about when the deadline was.

The Florida Department of State requested federal prosecutors on Nov. 9 to probe cases in at least four counties—Broward, Citrus, Okaloosa, and Santa Rosa—where voters received cure affidavits that listed a due date of Nov. 8 instead of the lawful deadline of Nov. 5.

The department released emails indicating the Florida Democratic Party (FDP) was behind the altered forms.

“Please pass the word to the FDP that they can’t arbitrarily add their own deadline to your form or [vote-by-mail] cures!! This is crazy!!” wrote Okaloosa County Supervisor of Elections Paul Lux.

Naples Daily News discovered the altered forms were part of a broader campaign by the FDP to have voters try to cure their rejected mail-in ballots even after election day.

The party was hoping a judge would rule in its favor and move the deadline for the cures, an unnamed Palm Beach Democratic activist told the paper.

One Democratic campaign consultant, Jake Sanders, said he raised the legality of spreading the incorrect forms with the party’s staff, but to no avail.

“I warned FDP staff members of the questionable legal status of altering a state form and misleading people their vote would be counted before the court case played out,” Sanders told the paper. “And coordinated campaign leadership told them to keep pushing it that ‘We are exhausting every possibility.'”

Making or using an altered State Department form is illegal under Florida law, the department’s General Counsel Bradley McVay wrote in a letter to federal prosecutors.

McVay also noted that federal law prohibits “disseminating false information as to the date, timing, or location of federal voting activity.” That law, however, only pertains to activities that are “preventing or impeding qualified voters from participating in an election.”

The campaigns of Nelson and Scott, as well as the Florida Democratic Party, didn’t respond to requests for comment.