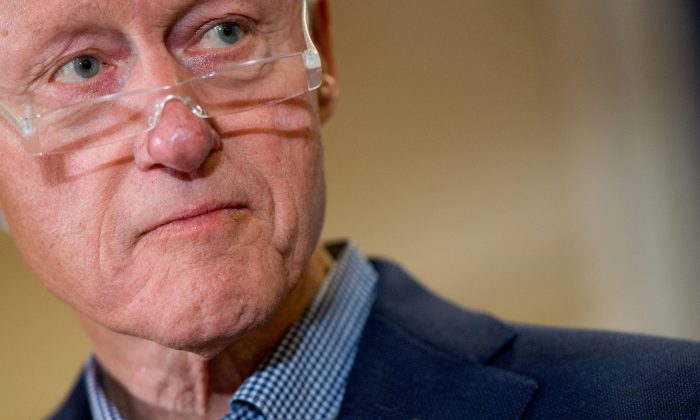 Juanita Broaddrick, a woman who accused former president Bill Clinton of rape, says his wife is “an enabler.”

The former nursing home administrator says Bill Clinton raped her in 1975, making the allegations in public while he was president in 1999.

“I was 35 years old when Bill Clinton, Ark. Attorney General raped me and Hillary tried to silence me. I am now 73….it never goes away,” Broaddrick said via Twitter this week.

A day earlier she took to the social media network to admit she was “dreading seeing my abuser on TV,” referring to how Bill Clinton was campaigning for his wife’s presidential campaign in New Hampshire.

“But,” she added, “his physical appearance reflects ghosts of the past,” which she said were “catching up.”

Broaddrick was reached by phone in Van Buren, Ark., by The Hill. She confirmed she wrote the tweets.

Broaddrick hasn’t commented on the situation much over the years, but said she wants to become more vocal with Hillary running for president.

“I’ve been quiet for too long, and now with the possibility of [Hillary Clinton] being the Democratic nominee and possibly president, I feel the need to get involved,” she said.

She told Breitbart that Hillary is “disgusting” for allegedly attempting to silence her while the candidate insisted in a recent campaign ad that women have a right to be believed if they accuse men of sexual assault.

“I thought, that’s the most disgusting thing,” Broaddrick said about the video. “She tried to silence me.”

“The only thing that I would like to say is I hope that someday these two people, these people that I feel like are so evil, will be brought to justice,” she added.

She said that she’s supporting Donald Trump, lauding him for bringing up Bill Clinton’s cheating and the allegations of sexual assault made against him.

“I’m glad someone did. Everyone has been hanging back and most of the mainstream media won’t approach it but it’s something that should be talked about,” she said.

Hillary Clinton has worked hard to avoid or downplay questions about the allegations made against her husband, which came up again over the weekend in Derry, N.H.

There, a heckler, later revealed to be Republican state Rep. Katherine Prudhomme O’Brien, shouted at Hillary about the situation.

“She told me this summer she doesn’t know who [Broaddrick] is and doesn’t want to know who she is. How can she [assess] that they are lying, which she told someone last month?”

Hillary called O’Brien “rude,” and said she wouldn’t call on her during the question-and-answer period.