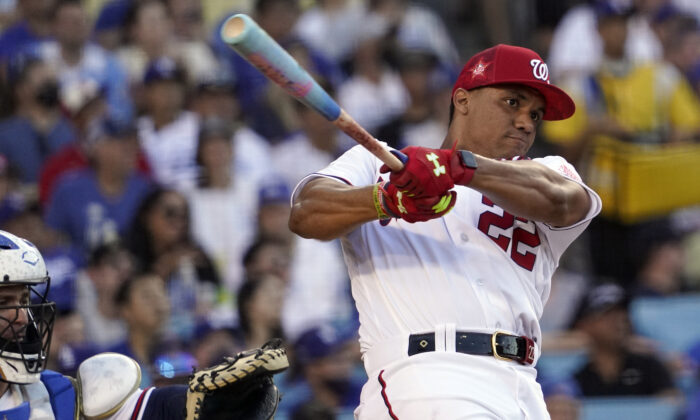 LOS ANGELES—Juan Soto bet heavily on his own talent and health by turning down a massive, long-term contract extension from the Washington Nationals.

Soto then went to the Home Run Derby at Dodger Stadium and showed why he almost certainly can’t lose.

Soto won the Derby for the first time Monday night, holding off Seattle Mariners rookie Julio Rodríguez 19-18 in the final.

The 23-year-old Soto hit 53 total homers, beating each of his three opponents by one homer while hitting second each time in the midseason power showcase. Soto was locked in at the plate even after spending an hour earlier at Chavez Ravine answering repeated questions about his possible departure from the Nats after turning down a $440 million offer.

“It feels amazing. It feels tiring,” said Soto, a reserve on the NL All-Star team for Tuesday’s Midsummer Classic. “I just tried to concentrate to square off the balls, because I know I have the power.”

With a big celebratory bat flip after the final homer dropped into the stands, Soto became the second-youngest Home Run Derby winner in baseball history—by a single day. At 23 years and 266 days old, Soto is only one day older than Juan González was when he won in 1993.

Soto hit a 482-foot blast to right-center while beating Cleveland’s José Ramírez 18–17 in the first round, and he got past 42-year-old Albert Pujols 16–15 to reach the final.

Rodríguez was even more impressive in the first two rounds while signaling his arrival on baseball’s biggest stages, particularly when he knocked off two-time defending champion Pete Alonso of the Mets 31–23 in the second round. Only four players had managed to hit 30 homers in a single Derby round before the Mariners’ 21-year-old phenom did it twice, and he finished the night with 81 of them.

“What did I show the fans? Who I am,” said Rodríguez, who made his big league debut on April 8 and hit his first career homer on May 1. “A little bit of my style, of who I am. I think they know a little bit now.”

In the final-round matchup between Dominican-born friends who sometimes play “Call of Duty” together, Soto started slowly while batting second, failing to hit his first homer until his 10th swing. He eventually caught fire to win a lively Derby that began with an on-field pyrotechnic flame display that spooked the competitors.

Soto hit the winning 415-foot homer with 20 seconds of bonus time to spare, then whipped his bat in the air before being swarmed by other Dominican All-Stars. His homers traveled a total of 5.41 miles.

Soto earns a $1 million prize—a whole lot more than his $700,000 salary this season—and another highlight on his resume as his time with Washington possibly nears an end. Soto started his day at Dodger Stadium answering rapid-fire questions in two languages about his future, with agent Scott Boras standing right next to him throughout the grilling.

“I’m a lone survivor,” Soto said with a laugh. “I’ve been going through all this stuff, and I’m still here standing up and with my chin up, all the time. And that shows you I can go through anything.”

Soto turned down a $440 million, 15-year contract to stay with the Nationals in a decision first reported by The Athletic last weekend, and he could be traded by the end of the month. That contract would have been the biggest in total value and the 19th-largest by average salary in baseball history.

“Right now, I’m not even thinking about it,” Soto said while hoisting the trophy over his head. “I’m a champion, and I will be a champion for the Nationals.”

Potential suitors for Soto are chasing a former World Series champion still reaching his prime, one whose power is just one aspect of his overall ability—but as he showed in Los Angeles, the long ball is a key component of his skills. Soto will turn 26 years old around the time when he is eligible for free agency after the 2024 season.

But until the final, the Derby’s best stories were the oldest and the youngest competitors.

Pujols beat top-seeded Kyle Schwarber in a heartwarming first-round upset before Soto finished his night in a victory that probably didn’t much bother Pujols, an idol to fellow Dominican stars such as Soto and Rodríguez.

“In [the Dominican Republic], I know all the people are really proud,” Soto said. “Since we all three were in the finals, three Dominicans, it just shows you, it’s a win for the DR, so we feel pretty proud about it.”
Pujols, a special commissioner’s invitee for Tuesday’s game, was embraced by both his fellow All-Stars and the Southern California fans who cheered for him for nine seasons in Anaheim and again last year with the Dodgers.

Rodríguez became the third-youngest Derby finalist at 21 years, 201 days old, with only Vladimir Guerrero Jr. and Bryce Harper getting there quicker. Rodríguez will have another chance to become the youngest

Derby winner next year at home in Seattle’s T-Mobile Park, since he’ll still be younger than González was in 1993 or Soto is today.

Rodríguez’s 32 dingers against Texas’ Corey Seager in the first round were the second-most ever in that round, and the rookie was nearly as sharp in the second round while finishing off Alonso, whose mid-competition meditation sessions didn’t do the trick.

Pujols was seemingly everybody’s sentimental favorite competitor heading into his fifth and final Home Run Derby, this time as a platoon player with just six homers this season for the Cardinals. Pujols is fifth on baseball’s career list with 685 homers, but he hadn’t tried the Derby since 2015 while with the Angels.

He hit just one homer in the first minute at Dodger Stadium before taking his timeout and choosing a lighter bat, which allowed him to finish strong with 13 homers in regular time in the opening round — including a break for a 30-second ovation from the other All-Stars, who gathered around him and cheered before his bonus time.

Pujols’ total was the lowest so far in the Derby, and he thought he was done—he even gave away his batting gloves to Joe Musgrove’s cousin. He had to retrieve the gloves for overtime after Schwarber managed only 13 himself, and Pujols held off Schwarber to advance.