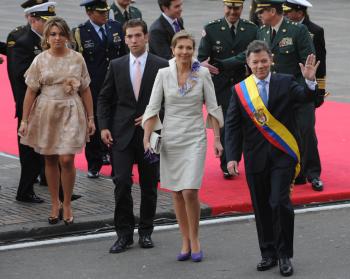 The swearing-in ceremony was attended by the leaders from Latin American and Caribbean countries, but Venezuelan President Hugo Chavez was not among them.

Diplomatic ties were severed recently between Colombia and Venezuela over accusations that Chavez is harboring Colombian guerrillas, including FARC (Revolutionary Armed Forces of Colombia) leaders in its territory. Bogota also has poor ties with Bolivia, Argentina and Ecuador.

Santos won last June’s election with 69 percent of the vote. He succeeds ally Alvaro Uribe, who was appointed earlier this month as vice chair of the United Nation’s inquiry into the deadly Gaza Flotilla incident.

Santos is known for being soft on Caracas. The former defense chief and finance minister said in his inauguration speech that he would seek to improve relations with neighbors, Venezuela, Ecuador and others.

Caracas responded immediately saying it would like to have a “face-to-face” meeting with Santos.

Despite Colombia’s efforts to develop social and economic programs, the country remains the world’s number one cocaine producer and drug trafficking is blamed for fueling armed insurgents and threatening political stability.