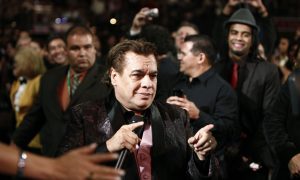 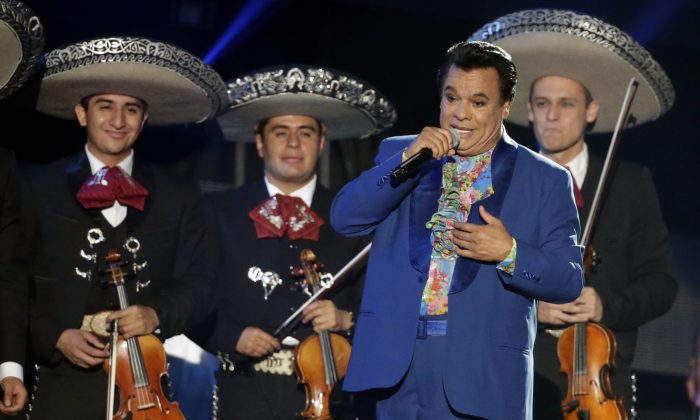 FILE - In this April 28, 2016, file photo, Mexican singer Juan Gabriel performs during the Latin Billboard Awards in Coral Gables, Fla. Representatives of Juan Gabriel have reported Sunday, Aug. 28, 2016, that he has died. Gabriel was Mexico's leading singer-songwriter and top-selling artist with sales of more than 100 million albums. The statement says he died Sunday, but did not say where. (AP Photo/Wilfredo Lee, File)
Americas

“You don’t know what you have until it’s gone” aptly underscores remembrances of Juan Gabriel for his many tear-filled fans, who gathered last week at his star on the Hollywood Walk of Fame. The Mexican superstar singer died recently at age 66, two days after what had been described as an “electrifying” performance at the Forum, in Inglewood, Calif., the first leg of what was to have been a multiple-city tour.

Called “the ultimate showman” by Billboard’s Gabriela Flores, the icon to millions of Spanish speakers around the world will not just be remembered for his natural style of music, unique dance moves, and colorful sequined or simmering pink, turquoise blue, or canary yellow silk outfits on stage, but in a large way for the way he lived his life, simply and humbly, unspoiled by worldwide recognition on the scale of Prince and Michael Jackson.

Neither did his saga of rag-to-riches unhinge him from what many considered his greatest personal asset: his sincerity.

“He was the same person in public and private,” reflected Jose Martinez, a 50-year-old electronic technician in Los Angeles who said he had listened to Juan Gabriel since his childhood.

The story of Juan Gabriel chronicles a virtuoso reared in an orphanage in the border town of Juarez, Mexico, where his mother had left him because she could not afford him, the youngest of her 10 children. Who would have guessed he would grow up to be called “El Divo de Juarez?”

“We lost our Prince, our Bowie, our Elton John,” tweeted Mariana Atencio, a news anchor on Spanish-language network Univison.

But a fan answered the tweet: “Don’t believe it. Juan Gabriel was singular.”

Juan Gabriel, or “Juanga,” crooned universally loved melodies about love lost and heartbreak, which brought audiences to tears. Hits like “Hasta Que Te Conoci” (“Until I Met You”), told of a man learning the meaning of suffering from a lover who mistreats him, and the sad-sack “Querida” (“Dear”) juxtaposed the soft-spoken, effeminate man’s Latin American origin, where prototypic males are supposed to be macho.

His stage mannerisms brought comparisons to Michael Jackson: He twitted his fingers, and blew kisses and sweetly told concert-goers his love for them. That and his flamboyant, Liberace-esque costumes fueled gossip columns on his sexual orientation.

Characterized as “intensely private,” Mr. Gabriel neither acknowledged nor denied that he was homosexual. He insisted that labels were not important. “Lo que se ve, no se prejunta,” (“Don’t ask what you can see”) he was known to say.

Mr. Gabriel once remarked he had the best of both worlds, being happy and single. “I have many loves but the most important are my mother, my children, my sister, my brothers, my nieces and nephews and my songs.”

The singer left behind four adult children, three of them adopted and one reportedly through artificial insemination with his lifelong friend Laura Salas.

Whether accompanied by tight-vested, sombreroed mariachis or symphony orchestras, Mr. Gabriel got notice not just for his singing talent but also his composing. Over 1,800 compositions are credited to his hand. Selling over 30 million records in his career, notes Billboard, his last album, “Los Duo,” was the Latin album of the year in 2015.

Mr. Gabriel might have generated a greater following with an English-speaking fan base in the arc of Marc Anthony or Enrique Iglesias were it not for his steadfast desire to maintain an identity as Mexican.

“American music has infiltrated the entire world enough as it is,” he told the Los Angeles Times in 1999. “Mexican music must be defended with vigilance. … My thoughts, my feelings, my spirit, they are all in Spanish.”

His followers point to a seemingly unshakable truth about Juan Gabriel. “He was a very kind person,” said Lizzete Casillas, 27, from Mexico City, who studies English in Los Angeles.

In such rarified air of celebrity status, Mr. Gabriel was not known to use drugs or lead a life on the edge or cause any kind of ruckus.

Occurrences in Mr. Gabriel’s free time could connote his character. Mr. Gabriel’s manager recounted to the Los Angeles Times prejudice shown to him at an antique shop in West Hollywood, Calif. Perceived as a “poor Mexican,” he was shooed off by the shop owner. Brushing off the slight without harsh words, Mr. Gabriel headed out to the next shop, knowing he could have bought the entire block if he wanted.

Mr. Gabriel’s good heart also manifested in charity work. Namely, in a tip of the hat to his humble origins in an orphanage, he did benefit concerts each year for homes for orphaned and underserved children.

“His lyrics are very touching and deep,” Ms. Casillas told the Epoch Times, adding the “sincerity” of song paralleled his life, which cut across generations. Her memories include “flickers” of her mother singing and sashaying to his beat. He has touched people across age brackets, she thinks, with his music and his “way of being.”