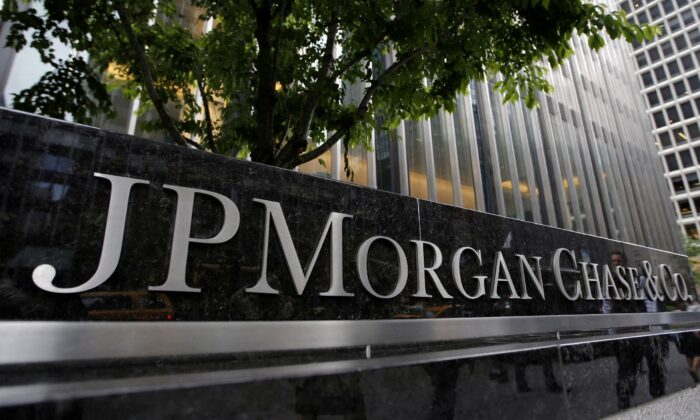 A view of the exterior of the JP Morgan Chase & Co. corporate headquarters in New York City, on May 20, 2015. (Mike Segar/Reuters)
Businesses in COVID-19

JPMorgan Chase announced on Monday that it would be repealing the protective measures instituted to fight the CCP (Chinese Communist Party) virus in the workplace, including mandatory masking, vaccines, and testing.

The largest bank in the United States, JPMorgan Chase & Co, made the announcement to its employees via a company-wide memo.

“Effective immediately, masking in our corporate office buildings will be completely voluntary for both vaccinated and unvaccinated colleagues. There will be employees who choose to wear masks—and that is completely fine.”

The memo continues: “On April 4, we will discontinue other measures such as mandatory testing for the unvaccinated, as well as asking employees to report COVID-19 infection and the associated contact tracing and notifications. These steps are in line with CDC guidance. We will also discontinue hiring only vaccinated individuals as of April 4.”

The announcement comes a little over a week after the state of New York lifted many of its CCP virus restrictions, including indoor mask mandates and vaccination requirements for employees.

The process began on Feb. 9, when Governor Kathy Hochul announced that the state would no longer be requiring proof of vaccination, or masks. Following the announcement, numerous corporate giants and innumerable small businesses have decided to take advantage of the policy to relax the stringent measures which have become widespread in the past two years. Amazon and Walmart are among the largest institutions to recently make masks and vaccines optional for employees, but what persists is a patchwork of differing masking regulations, varying greatly based on a given business’s risk evaluation and the preferences of those in charge of such policy.

Despite relaxing most measures, JPMorgan has not completely abandoned the precautions taken in the name of safety, and the dissonance between state and municipal laws could result in some employees being beholden to measures for longer. For example, the company notes that “New York City employees must continue to meet vaccination requirements, unless the City lifts the order,” referring to the municipal vaccination requirement for employees which is still in effect throughout the Big Apple.

With the new announcement, the bank has become the latest of many companies to lift such rules in the apparent return to normalcy as businesses wean off of such precautions. It is the latest sign that the business world has increasingly come to view the CCP virus as an endemic disease.