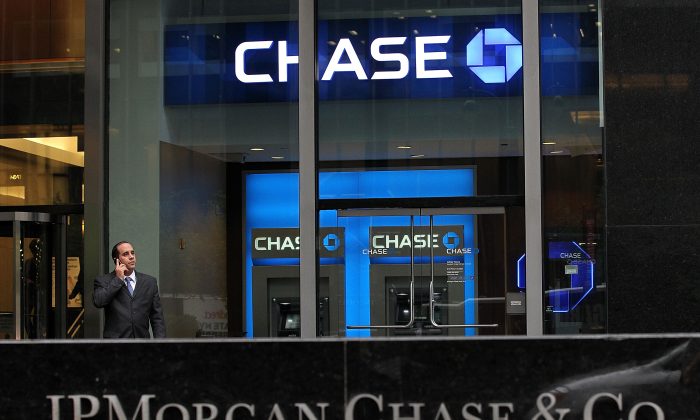 NEW YORK—JPMorgan Chase & Co. has agreed to pay $264.4 million in fines to federal authorities to settle criminal and civil charges that it hired friends and relatives of Chinese officials in order to gain access to banking deals in that country.

JPMorgan’s Asia affiliate allegedly created a quid pro quo program that would hire the children and friends of high-ranking Chinese officials, regardless of the person’s qualifications, in order to gain favor and win banking deals.

The United States has one of the strictest bribery laws in the world, known as the Foreign Corrupt Practices Act, where it effectively bans U.S. companies from paying foreign government officials to obtain or retain business. While JPMorgan did not pay Chinese officials directly, federal authorities said the hiring of unqualified persons related to Chinese officials was effectively the same thing. The only candidates who would fall under this program had to have a “directly attributable linked to business opportunity” to be considered for hiring. The Department of Justice estimates the Asia affiliate of JPMorgan earned at least $35 million in profits from Chinese state-owned companies.

Caldwell called the JPMorgan program, which was called the “Sons and Daughters Program,” was “nothing more than bribery by another name.”

Despite those strong words, the bank will avoid criminal bribery charges as part of the deal reached with the Department of Justice, the Securities and Exchange Commission and other regulators. The bank reached what’s known as a non-prosecution agreement over the allegations.

The Justice Department said it agreed to the non-prosecution agreement due in part to JPMorgan’s own cooperation in the case, where the bank undertook an internal investigation and fired six employees tied to the program and disciplined another 23 employees for their involvement.

“We’re pleased that our cooperation was acknowledged in resolving these investigations,” said JPMorgan spokesman Brian Marchiony in a statement. “The conduct was unacceptable. We stopped the hiring program in 2013 and took action against the individuals involved.”

According to the terms of the deal, JPMorgan has agreed to pay $72 million to the Department of Justice as well as $130.5 million in penalties to the Securities and Exchange Commission. It will also pay $61.9 million to the Federal Reserve in civil penalties, making it combined $264.4 million.