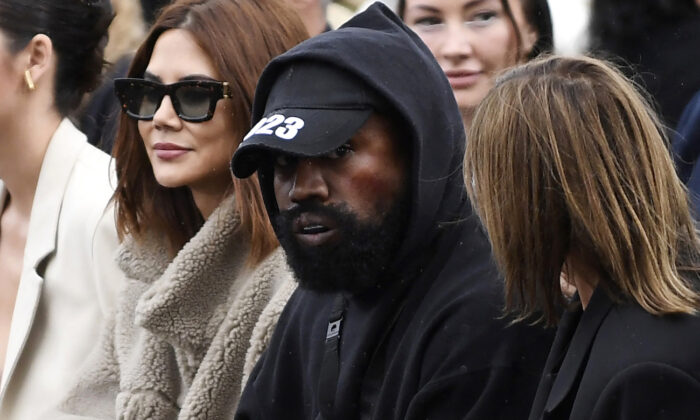 JPMorgan Chase has decided to end its business relationship with rapper Kanye West’s company Yeezy, according to conservative commentator Candace Owens, which comes after West was suspended from social media after posting content accused of being antisemitic.

Owens shared a letter reportedly from JPMorgan Chase indicating that the bank will terminate its business relationship with Yeezy and its affiliated entities by Nov. 21.

“We ask that you act promptly and transfer your business to another financial institution,” the letter reads, with no explanation for the decision except reference to a prior discussion with an unidentified, presumed, Yeezy representative about the termination.

The Epoch Times reached out to JPMorgan Chase with a request for confirmation and explanation for the reported severance of business ties with Yeezy, but the institution declined comment.

Owens did not say explicitly why she thinks JPMorgan Chase may have taken the decision, but suggested in a follow-up message on Twitter that the move may be related to the broader trend of de-platforming individuals who express controversial views.

West, who attended an Oct. 12 screening of Owens’s new documentary, told the New York Post’s Page Six that he had been dropped by a number of brands after his recent social media posts.

“Hey, if you call somebody out for bad business, that means you’re being antisemitic,” West said, according to the report.

“I feel happy to have crossed the line of that idea so we can speak openly about things like getting canceled by a bank,” he added, presumably referring to JPMorgan Chase.

Owens wrote in a separate post on Twitter that she was told “no official reason” had been given by JPMorgan Chase.

After West wore a “White Lives Matter” T-shirt at a fashion event in Paris on Oct. 3, Adidas decided to place its partnership with West “under review,” according to CNBC.

West, who is legally known as Ye, was recently locked out of his Twitter and Instagram accounts over posts alleged to be antisemitic, which the social media companies said violated their policies.

On Instagram, West shared a screenshot of a text exchange with fellow musician Sean “Diddy” Combs, in which he told him, “This ain’t a game. Ima use you as an example to show the Jewish people that told you to call me that no one can threaten or influence me.”

Shortly afterward, West was locked out of his Instagram account. He then took to Twitter, where he posted a controversial message that also got him suspended.

“I’m a bit sleepy tonight, but when I wake up I’m going death con 3 On JEWISH PEOPLE, ” West wrote. ‘The funny thing is I actually can’t be Anti Semitic because black people are actually Jews also. You guys have toyed with me and tried to blackball anyone whoever opposes your agenda.”

West’s exchange with Diddy was heavily criticized by the American Jewish Committee, which said in a statement that West should “figure out how to make a point without using antisemitism.”

“Over the last week, the musician has fomented hatred of Jews. The greed theme has led to a long list of Jewish stereotypes, such as being money-oriented or controlling the world’s finances.”

“The control theme seeks to falsely portray Jews as secret puppet masters ruling over others. Ye needs to learn that words matter,” the statement read.