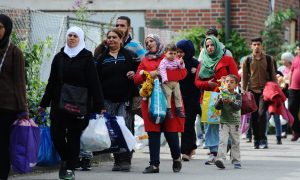 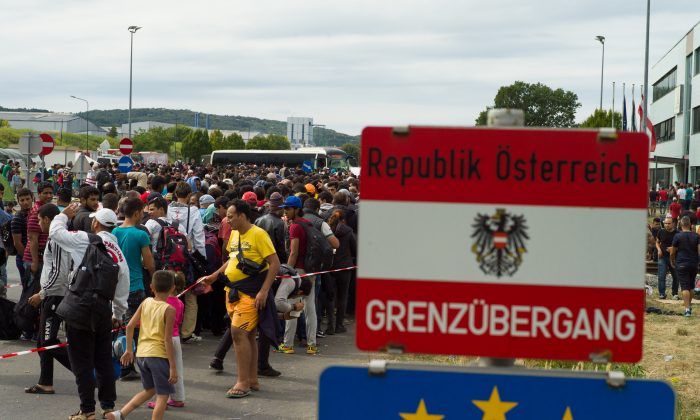 Migrants queue up for buses after they arrived at the border between Austria and Hungary near Heiligenkreuz, about 180 kms (110 miles) south of Vienna, Austria, Saturday, Sept. 19, 2015. (AP Photo/Christian Bruna)
Europe

Joy as Migrants Flood Into Austria; Tears for Those Kept Out

SZENTGOTTHARD, Hungary—Thousands of migrants flooded into Austria on Saturday after days of being shuttling from one country to another or seeing their paths into Western Europe blocked by border guards with dogs, razor-wire fences, barricaded bridges or riot police.

Austrian police said some 6,700 people traveled to the central European country from Hungary after being trapped Friday in a vicious tug-of-war as bickering European governments rapidly shut down border crossings or erected new fences to cut down the torrent of asylum-seekers.

Pain and uncertainty drained from the face of Adeeb Jaafri, a theater student from Damascus, as he crossed into Heiligenkreuz in Austria.

“Right now, I feel like I’ve been born anew. Now I don’t even see these long queues in front of me,” he said. “It makes no difference to me whether I am delayed whether I stay here two days. The important thing is that I’ve finally arrived. And that I am now finally safe.”

Others raised their arms in joy as they crossed the border, a milestone in their epic journey to safety. But the journey was chaotic, and reports emerged of families being separated as they fought for space on buses.

On the Hungarian side of the Austrian border, Hala Khatib of Damascus and her three daughters wept uncontrollably.

“I want to go to Germany. My husband is in Germany. I’ve come here all alone to this country. Please let me go,” she sobbed. “I am exhausted. Me and my children, we’re exhausted.”

Tens of thousands more are expected as people fleeing conflict and poverty in the Middle East, Africa and Asia cross the seas from Turkey to Greece and head north through Macedonia, Serbia and Hungary. On Saturday, the Greek coast guard said a 5-year-old girl found in the sea off the island of Lesbos died after the boat she traveled on sank, and 14 others were missing.

The normal routes north into Western Europe have all but disintegrated this week.

Asylum-seekers who had headed into Croatia after being beaten back by tear gas and water cannons on the Hungarian-Serbian border this week found themselves being returned on buses or trains back to Serbia or Hungary after Croatia declared it could not handle 20,700 people who have arrived since Wednesday. Those who went from Croatia to Slovenia, seeking another way into Austria, faced blocked bridges and determined Slovenian riot police.

Some nominal cooperation emerged Saturday as Croatia bused people to Hungary, who bused them to Austria.

Hungary’s military, meanwhile, announced it was calling up 500 army reservists to further reinforce its borders.

Though sympathetic to their plight, Croatian President Kolinda Grabar Kitarovic demanded that the European Union step forward and take responsibility for the people in transit through this country of 4.2 million.

“We’re flooded, local communities are flooded, the numbers of refugees in some areas is far greater (than) the number of local residents,” she told The Associated Press. “So we need to control, we need to stop the flow, we need to get reassurances from European Union about what happens to these people who are already in Croatia.”

Mindful that hundreds of migrants were walking through Croatian cornfields and forests to cross her country, Kitarovic stressed that further measures would be taken to secure Croatia’s borders. She also warned of the dangers of mines leftover from the country’s 1991-95 war.

“I will advise highly anyone to use official crossings. But we have to take further measures to insure stability on the border, and that there are no breaches through the cornfields, or forests or any other areas,” she said.

The thousands seeking sanctuary as borders close around them are camping in the open, sleeping on streets, exposed to heat in the day and cold in the night.

Police in Slovenia say more than 1,000 migrants have entered the country, but hundreds more are waiting at the border as they let in only limited numbers. As temperatures dipped overnight, hundreds of migrants at the Obrezje crossing set up tents, camping out without food or water.

Ammar Jessem, 24, a dentist from Baghdad, said the migrants had heard the border was open and were disappointed after walking through Croatia to find it wasn’t.

Croatia Is the Latest Migrant Hotspot After Hungarian Clashes

“We don’t want to stay here. We want to go to Austria. From Austria, we go everywhere,” he said.

European Union enlargement commissioner Johannes Hahn on Saturday proposed giving 1 billion euros ($1.1 billion) to Turkey to deal with the migrant crisis. He spoke after touring a refugee camp in Gevgelija, on Macedonia’s southern border with Greece, where about 5,000 migrants are passing through daily.

At the camp, Mustafa Alrufay, 26, from Iraq, told The Associated Press he left to escape the bloodshed in his country. Alrufay was determined to get to Western Europe but completely flummoxed now as to how.

“I have no idea where this journey will bring me, because I do not know which border after Serbia will be open,” he said. “I also have no idea in which country I’ll be accepted and find secure shelter to live and work.”