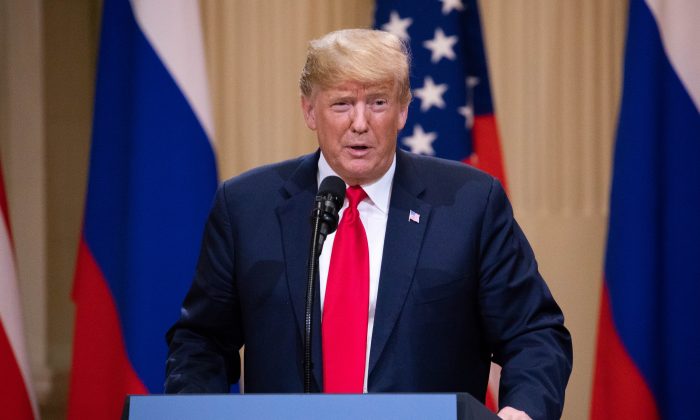 Journalists Try to ‘Get’ Trump on Finland Comments, but Fall Short

“I enjoyed being with you a couple of days ago. NATO has, I think, never been stronger. It was a little bit tough at the beginning, but it turned out to be love. I appreciated your support,” President Trump said during a meeting with Finnish President Sauli Niinisto in Helsinki.

Reporters for several media outlets jumped on Trump’s comment to Niinisto, hastily tweeting hot-takes to “get” Trump for suggesting he doesn’t know Finland isn’t a NATO member. However, Niinisto attended the NATO meeting, according to the Finnish government’s official website.

The president “was invited to attend a working dinner for heads of state and government on Wednesday 11 July and a meeting to discuss the NATO Resolute Support crisis management operation on Thursday 12 July,” the government website said. He had dinner with Trump along with other heads of state.

Several reporters and pundits, notably Josh Rogin of CNN and the New York Times, attempted to spin Trump’s statement to force a narrative that Trump doesn’t know what countries are in NATO.

“Trump told the Finnish President Just now he enjoyed spending time with him at the NATO summit,” Rogin wrote on Twitter while tagging his CNN colleagues Jake Tapper and Christiane Amanpour. “Finland is not part of NATO. #awkward.”

Trump told the Finnish President Just now he enjoyed spending time with him at the NATO summit. Finland is not part of NATO. #awkward @jaketapper @camanpour

Then, when word spread that the Finnish president, Sauli Niinisto, was at the NATO summit in Brussels last week, Rogin tried to defend his earlier tweet.

“Finland is a member of NATO’s Partnership for Peace. But focusing on the strength of NATO is still an odd choice of things for Trump to focus on at his one public meeting with Finland’s head of state,” he wrote.

He later admitted that “the Finnish President did attend the NATO summit in Brussels” and linked to a press release from the Finnish government about the meeting.

But it wasn’t just Rogin.

New York Times reporter Julie Davis, who is also employed as a CNN analyst, wrote on Twitter that “does he think that Finland is in NATO?”

Trump to Finnish Pres Sauli Niinistö, per pool: "I enjoyed being with you a couple of days ago. NATO has, I think, never been stronger. It was a little bit tough at the beginning, but it turned out to be love. I appreciated your support." Does he think Finland is in NATO?

Rebekah Entralgo for left-wing website ThinkProgress turned the narrative into an article with the headline: “Trump thanks Finland for support on NATO, but Finland is not in NATO.”

According to NATO’s website, the Partnership for Peace, of which Finland is a member, “allows partners to build up an individual relationship with NATO, choosing their own priorities for cooperation.” Twenty-one non-NATO nations participate in the endeavor, Finland included.

Activities under the program, NATO says, “touch on virtually every field of NATO activity, including defense-related work, defense reform, defense policy and planning, civil-military relations,” and “military-to-military cooperation and exercises.”