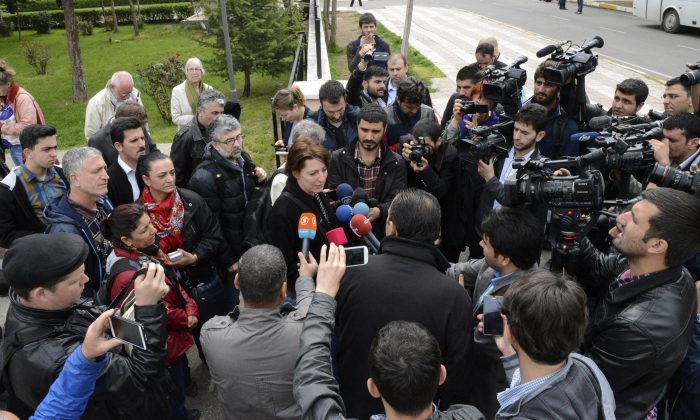 British journalists Jake Hanrahan and Philip Pendlebury had a fearful stint of jail time in a Turkish jail cell earlier this month. The two men, along with local journalist and colleague Mohammed Ismael Rasool, were working in southeastern Turkey when they were arrested and charged with “aiding a terrorist organization.”

All three were reporting for Brooklyn-based VICE News on the ongoing conflict between the Turkish state and the banned Kurdistan Workers Party (PKK).

Their story is not unique. In the lead-up to important parliamentary elections Nov. 1 and against the backdrop of renewed fighting with the PKK in the highly charged region, 18 editors from nine leading publications were charged with terrorism in August for publishing a single photo. Also, authorities raided the offices of an independent media group on Sept. 1.

Five days later, Turkish authorities detained Dutch freelance reporter Fréderike Geerdink in Yuksekova, a town also in southeastern Turkey. Tensions have also played out over social media, including a mob attack on a building that houses multiple media outlets. The row was over a tweet that allegedly misquoted President Recep Tayyip Erdogan.

Political tensions are at least partly to blame for the ramp-up of pressure on journalists, though in 2013 and 2014 Turkey jailed more journalists than any other country in the world. In June, Turkey’s ruling party lost its parliamentary majority, essentially blocking Erdogan’s plans to substantially shore up his presidential power.

The government has taken increasingly extraordinary measures to fight against the PKK, which is designated by the government as a terrorist organization.

On Sept. 8, ground forces were deployed across the border into northern Iraq for the first time since 2011. The move indicates that they are ratcheting up the battle against Kurdish rebels who have hit the Turkish military with a string of attacks in recent weeks.

Though journalists Hanrahan and Pendlebury were released on Sept. 3, their colleague Mohammed Rasool remains in jail awaiting trial. He is known as a skilled professional journalist and translator who has done extensive work throughout the Middle East with VICE News, The Associated Press, and Al Jazeera.

A Turkish official from the Diyarbakir governor’s office told The Associated Press that the journalists were in custody at police anti-terrorism department for filming without first seeking “media accreditation” from authorities. He spoke on condition of anonymity because of rules that bar officials from speaking to journalists.

We were detained for doing our jobs and hit with bizarre accusations about being agents of the Islamic State—a group we weren’t even reporting on.
— Jake Hanrahan, British journalist

A commentary published by VICE News on Sept. 8 describes their work in the region and the 8 days they spent behind bars.

“We were detained for doing our jobs and hit with bizarre accusations about being agents of the Islamic State—a group we weren’t even reporting on,” wrote Hanrahan.

In his account of detention, Hanrahan describes witnessing fighting that he states has claimed hundreds of lives in just six weeks, largely by the youth wing of the PKK, the YDG-H.

Other sources put the number of soldiers, police, and village guards killed in the conflict closer to about 60 since July in the renewed fighting between the rebels of the PKK and the security forces, which destroyed a 2 1/2-year-old peace process. Around 90 rebels have also been killed, according to state-run media.

Hanrahan’s account of what his team saw while reporting paints a picture of a rapidly deteriorating situation in which innocent bystanders are getting caught up.

“Before we were detained we’d already witnessed dozens of armed teenagers roaming the streets of Cizre, and had come under fire in Silopi,” he wrote. “We’d also met a 13-year-old girl who’d caught three stray bullets in her neck, her ribs, and her back, when fighting broke out between the YDG-H and the police.”

He said that as journalists, their focus was to report on the “spiraling violence and the civilians who live among it and are being terrorized by both sides.”

The goal, according to Simon, is to target reporters with “broadly worded anti-terror and penal code statutes.” He adds that this includes “coverage of banned groups and investigation of sensitive topics with outright terrorism or other anti-state activity” such as the PKK.