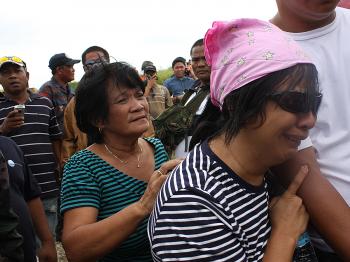 Friends and relatives grieve at the scene of a massacre of at least 46 kidnap victims in Ampatuan town, on in Maguindanao Province, Philippines. (Jeoffrey Maitem/Getty Images)
World

By Charlotte Cuthbertson
Print
In a massive act of violence, more than 30 people have been murdered in the Philippines, at least 12 of them journalists.

Mostly unidentified armed men, including two policemen, appear to be responsible, according to Reporters Without Borders (RSF). Some of them have been linked to the province’s governor, a supporter of Philippine President Gloria Arroyo The victims were massacred on the southern island of Mindanao, and some of the victims were beheaded, said RSF.

Clothilde Le Coz, the Washington, D.C. director of RSF said the organization has a correspondent there who they are in communication with.

“It’s one of the biggest massacres of journalists we’ve ever seen,” said Ms. Le Coz. “We convey our condolences and sympathy to all journalists in the Philippines, who are in state of shock after this appalling massacre.”

The press freedom organization added that they often condemn the culture of impunity and violence in the Philippines, particularly Mindanao, which is in Maguindanao province.

“This time, the frenzied violence of thugs working for corrupt politicians has resulted in an incomprehensible bloodbath,” said RSF in a release. “We call for a strong reaction from the local and national authorities.”

The massacre took place a few hours after around 50 gunmen led by Andal Ampatuan Jr., the mayor of Shariff Aguak (a municipality in Maguindanao province), and a police inspector identified solely by the name of Dicay kidnapped members of a large convoy of supporters of Mr. Esmael Mangudadatu, an Ampatuan clan opponent who wants to run for governor, said RSF.

The convoy of Mangudadatu supporters, accompanied by journalists, was on its way to an electoral bureau to file documents related to his candidacy. Early speculation is that the gunmen were trying to prevent them from reaching their destination. The fatalities included Mangudadatu’s wife, sister and other relatives. The governor’s son is also alleged to have been involved in the massacre.

Four journalists had already been murdered to date this year in the Philippines; all were shot.

“We hope that what happened there will help not only journalists, but people, to be aware of what’s going on regarding information and how the free flow of information can be cut,” Ms. Le Coz said.

Nonoy Espina, the vice-president of the National Union of Journalists of the Philippines (NUJP), told Reporters Without Borders: “The government must without question bring those responsible for this massacre to justice, not just the killers but also the masterminds, whoever they are.”