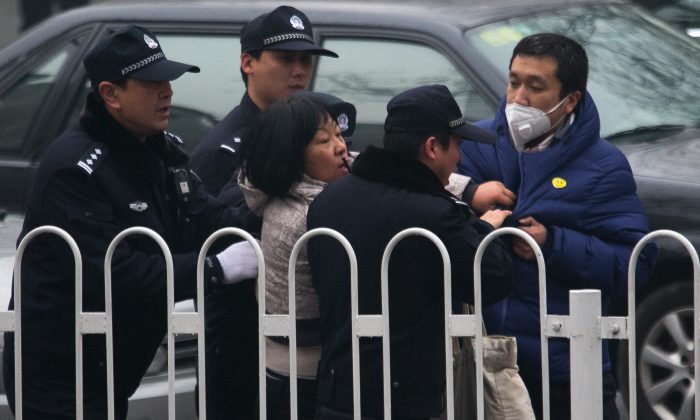 NEW YORK—China, Egypt and Iran top the list of the world’s leading jailers of journalists in a new annual report by the New York-based Committee to Protect Journalists. Eritrea, Ethiopia and Turkey also figured prominently on the list.

The report released early Tuesday says a quarter of the 199 journalists worldwide who were in prison as of Dec. 1 because of their work were in China. The Communist Party-run country under President Xi Jinping had 49 journalists behind bars, the highest number for China since the CPJ began its annual survey in 1990.

The report also singled out three jailed Chinese who were not included on its annual list: the three brothers of a U.S.-based journalist with Radio Free Asia who covers China’s treatment of his ethnic group, the Muslim Uighurs. CPJ calls the jailing of Shohret Hoshur’s brothers an act of retaliation for his reporting and an example of “the lengths to which China is willing to go to silence its critics.”

Egypt was second on the list with 23 journalists in prison, up from a dozen a year ago and zero in 2012.

“Perhaps nowhere has the climate for the press deteriorated more rapidly than in Egypt,” the report says, accusing President Abdel-Fattah el-Sissi of acting under the pretext of national security since he took office in 2014 a year after the military ousted Islamist President Mohammed Morsi. In August, el-Sissi approved a law that included heavy fines for journalists who don’t follow the government line.

Washington Post reporter Jason Rezaian is among the 19 journalists that the CPJ lists as being behind bars in Iran, an Islamic republic under Supreme Leader Ayatollah Ali Khamenei and President Hassan Rouhani.

The new report calls the east African country of Eritrea “the world’s worst abuser of due process,” as no CPJ-listed journalist detained under long-time President Isaias Afwerki has ever been publicly charged with a crime or taken to court for trial. Seventeen journalists are currently behind bars there.

The report expresses special concern about Turkey, where the number of jailed journalists doubled over the past year to 14. Late last month, hundreds of protesters chanted “Free press cannot be silenced” after journalists Can Dundar and Erdem Gul were jailed on terror and espionage charges for their reports on alleged Turkish arms smuggling to Syria. The journalists were investigated after President Recep Tayyip Erdogan filed a criminal complaint.

And in August, authorities detained three journalists reporting for Vice News in Turkey’s restive Kurdish southeast. One of them, Mohammed Rasool, is still in custody. Rasool, an Iraqi citizen, had worked as a news assistant for the AP and other media organizations.

Ethiopia, under Prime Minister Hailemariam Desalegn, has 10 journalists behind bars. At the time of President Barack Obama’s visit to Ethiopia in July, Desalegn defended his government’s commitment to democracy and said the country needs “ethical journalism,” not reporters that “pass the line.”

The report says other countries with several journalists behind bars in 2015 include Azerbaijan with eight, Saudi Arabia and Syria with seven each, Vietnam with six, and Bahrain, Bangladesh and Myanmar with five apiece.

The CPJ report does not list journalists who are held by non-state groups such as the Islamic State but estimates that at least 40 journalists are missing in the Middle East and North Africa, with many thought to be held by militant groups.

A separate report released Tuesday by the Paris-based Reporters Without Borders lists 153 journalists currently imprisoned around the world, along with 161 “citizen journalists.” The report also says 54 journalists are currently being held hostage around the world, with the Islamic State group holding 18 in Syria and Iraq and the Houthi rebel group in Yemen holding nine.