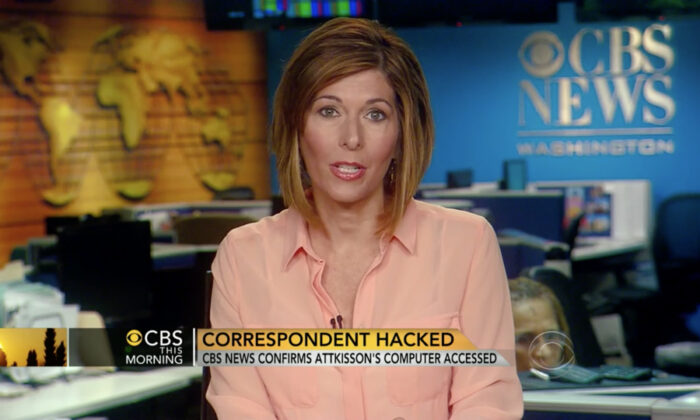 CBS News investigative reporter Sharyl Attkisson discusses the hack of her computer on 'CBS This Morning' on June 17, 2013. (Screenshot/CBS)
US News

Journalist Sues Rod Rosenstein for Allegedly Spying on Her Computers

The lawsuit (pdf), filed at the U.S. District Court in Maryland, alleges that FBI and DOJ officials violated Attkisson’s First and Fourth Amendment rights by conducting “unauthorized illegal surveillance” on her and her family’s computers and phones from 2011 to 2014. At the time, Attkisson published investigative reports on the Obama administration’s Fast and Furious gun-trafficking investigation and the controversial attack on the U.S. embassy in Benghazi, Libya.

The lawsuit also names Shawn Henry, who at the time of the alleged spying operation served as the FBI’s executive assistant director in the Criminal, Cyber, Response and Services branch. Henry is now the president of cybersecurity firm CrowdStrike.

Rosenstein and Henry did not respond to a request for comment.

Also named in the lawsuit is former Secret Service special agent Shaun Bridges. Bridges has since been convicted for stealing bitcoin from the federal government. Prior to his conviction, Bridges worked on the Silk Road Task Force, a multi-agency group that investigated the Silk Road online marketplace for illicit goods.

The lawsuit also names Roger Clarke, another member of the Silk Road Task Force, and Ryan White, who, as alleged, worked as an informant for the DOJ and as a contractor for the group supervised by Rosenstein. As part of his work, White “and others were ordered to illegally hack into computer systems, servers, emails and phones,” the lawsuit alleges.

White, Bridges, and Clarke could not be reached for comment.

Despite a yearslong court battle with the DOJ, Attkisson’s legal team has previously been unable to secure the names of the officials involved in the surveillance operation on her and others. Her legal team recently made a breakthrough after one of the people involved in the surveillance operation came forward and admitted to his involvement. The person who came forward is one of the defendants, Attkisson told The Epoch Times.

Attkisson, who has written a number of articles for The Epoch Times, said that despite having forensic evidence and a first-hand witness, she expects the DOJ to continue fighting her in court.

“You’ll never get to the proof,” Attkisson said. “They have six ways from Sunday to keep a case from going forward.”

Attkisson has been engaged in a yearslong lawsuit against the DOJ. In March last year, an appellate panel ruled that former Attorney General Eric Holder is immune from Attkisson’s claims. Two of the three judges on the panel ruled that Attkisson’s claims should be dismissed because she took too long to determine the names of the unnamed federal agents who breached her computers. One of the judges dissented, arguing that Attkisson’s attempts to discover the identities of the people have been repeatedly thwarted by the DOJ, which blocked the discovery of evidence and did not turn over any documents in response to subpoenas, according to Attkisson’s website.

“They’re gonna pull out all the stops using taxpayer money,” Attkisson said. “At least this information is exposed.”

The DOJ did not respond to a request for comment.

Attkisson finally secured the names of the officials after a former government agent stepped forward and admitted to spying on her, according to the lawsuit. The agent alleged that the group reported to Rosenstein. According to Attkisson’s website, the government hackers reported to Henry. The government operation to surveil Attkisson and others was run from the U.S. Attorney’s office in Baltimore, Maryland, the lawsuit claims.

“The Plaintiffs first acquired the details regarding key individuals involved in the surveillance in August, 2019, from a person involved in the wrongdoing who has come forward to provide information. Prior to that time, the Government and its agents and representatives had denied that any such conduct had occurred, including denials in Court pleadings and argument,” the lawsuit states.

While she was surveilled, Attkisson won an Edward R. Murrow award and an Emmy Award for her investigative reporting.

Prior to retiring from public service, Rosenstein served as the deputy attorney general. In that role, he oversaw the special counsel investigation by Robert Mueller. Rosenstein signed one of the FBI’s renewal applications for a Foreign Intelligence Surveillance Act warrant to spy on former Trump 2016 presidential campaign associate Carter Page.

During Henry’s tenure as president of CrowdStrike, the company performed the forensic analysis of an alleged hack of the Democratic National Committee’s servers. CrowdStrike assessed that Russian operatives were the culprits.

Mueller arrived at the same assessment and indicted several Russians. The special counsel concluded his investigation last year, finding insufficient evidence that anyone on the Trump campaign colluded with Russia to interfere in the 2016 election.

At the time of the alleged spying on Attkisson, Mueller served as the director of the FBI.