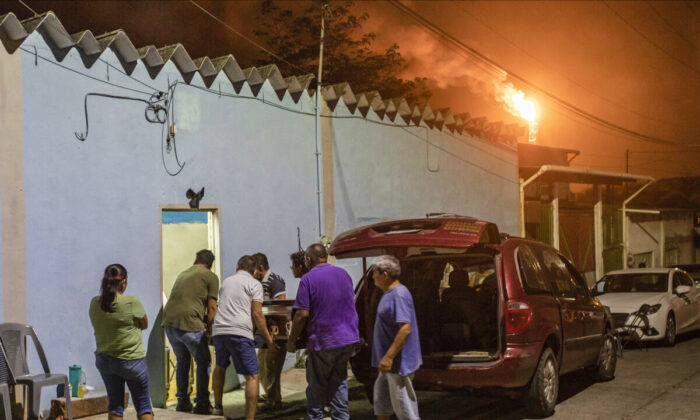 Relatives of video-journalist Sheila Johana Garcia Olivera carry her coffin to her family's home for her wake in Minatitlan, near the Lazaro Cardenas oil refinery where gas burns in the background, in Veracruz state, Mexico, on May 10, 2022. (Felix Marquez/AP Photo)
Americas

Journalist Killed in Mexico Was Threatened in Recent Weeks

The director of an online news site in southeast Mexico had been threatened in recent weeks over her journalism before being killed with a colleague, her brother said Tuesday.

Yessenia Mollinedo Falconi and Sheila Johana García Olivera, the director and a reporter, respectively, of the online news site El Veraz in Cosoleacaque were shot Monday afternoon while sitting in a vehicle parked outside a convenience store.

They were the 10th and 11th media workers killed in Mexico so far this year and their deaths came just days after another journalist was killed in the northern state of Sinaloa.

Ramiro Mollinedo Falconi, also a journalist, said his younger sister had received threatening phone calls ordering her to remove crime-related stories from her news site and that more recently she had dedicated her coverage to Cosoleacaque city hall.

“She told us all that 15 days ago she had been the subject of threats, that they were going to finish her off, and that they would kill her,” Ramiro Mollinedo Falconi said.

García Olivera had been working for his sister for less than year, he said.

Mexico’s state and federal governments have been criticized for neither preventing journalists’ killings nor investigating them sufficiently.

President Andrés Manuel López Obrador said Tuesday that the case would be investigated.