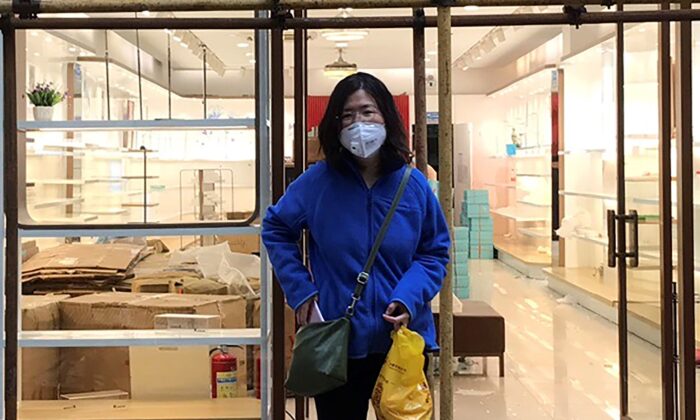 Zhang Zhan stands near scaffoldings outside a shop during a visit to Wuhan in Hubei Province, China, on April 11, 2020. (Courtesy of Melanie Wang via AP)
China Human Rights

Reporters Without Borders (RSF) on Monday urged Beijing to release a dangerously ill Chinese citizen journalist who was imprisoned over her reporting of the COVID-19 pandemic.

Zhang, a 38-year-old former lawyer, began reporting on the ground in Wuhan, the epicenter of China’s outbreak, in early February 2020. She was handed a four-year jail sentence on Dec. 28 last year on the grounds of “picking quarrels and provoking trouble.”

Her reporting was among a handful of people whose firsthand accounts from crowded hospitals and empty streets painted a more dire picture of the pandemic epicenter than the Chinese Communist Party’s (CCP) narrative.

In dozens of shaky cell phone videos uploaded on YouTube, Zhang detailed her visits and interviews in hospitals, quarantine centers, and the Wuhan Institute of Virology, which challenged the Chinese regime’s rhetoric.

United Nations human rights experts on Nov. 22 said that she has been left barely able to walk or raise her head without assistance after going on a 17-month hunger strike, which resulted in severe malnutrition, a gastric ulcer, advanced edema of her lower limbs, and other health complications.

The former lawyer-turned-journalist refused to plead guilty and started a hunger strike in protest of allegations against her.

In a press release, journalism advocacy group RSF called for Zhang’s release, saying that she is “now facing impending death.”

“Zhang, 38, is close to death after a partial hunger strike she has been conducting to protest her innocence,” RSF said. “In November, the last time her family was allowed to visit her, Zhang, whose height is 177 centimetres, weighed less than 40 kilograms and could not walk properly or even raise her head without help.”

RSF East Asia Bureau head, Cédric Alviani, issued a statement urging the international community to build up pressure on the Chinese regime to “grant Zhang Zhan medical parole and ensure that she is released before it is too late.”

“Zhang Zhan courageously risked her life reporting in Wuhan at a time when very little information was available on the mode of transmission and severity of Covid-19, and she should have been celebrated as a hero instead of being detained,” said Alviani.

Zhang’s charge for “picking quarrels and stirring up trouble” is often used by the CCP to prosecute political dissidents.

“According to multiple reports citing her relatives’ comments, Ms. Zhang is near death,” State Department spokesperson Ned Price told reporters during a briefing.

“We have repeatedly expressed our serious concerns about the arbitrary nature of her detention and her mistreatment during it,” he added. “We reiterate our call to the PRC for her immediate and unconditional release, and for Beijing to respect the free press and the right of people to express themselves freely.”

Zhang’s mother, Zhang Ju, said her daughter has said she won’t end her protest until her name is cleared by the court.

“I don’t think she can last a long time,” Zhang Ju wrote on Oct. 30. “I wish the world would remember what she looks like if she fails to survive this coming cold winter.”