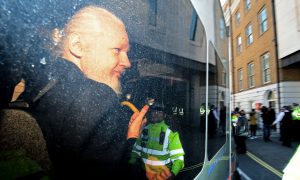 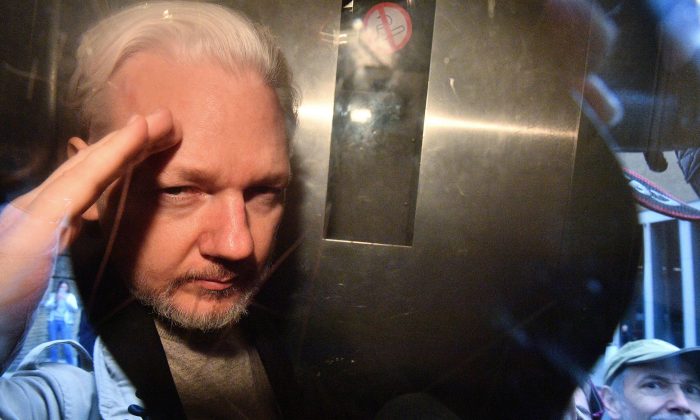 WikiLeaks founder Julian Assange gestures from the window of a prison van as he is driven out of Southwark Crown Court in London on May 1, 2019. (Daniel Leol-Olivas/AFP/Getty Images)
Viewpoints

Journalism or Espionage? Why Assange Is Both a Danger and a Hero

What good is the goose, when the goose giveth and the law taketh away?

The issue of freedom of the press has again taken hold of the front pages recently, as charges were announced by the U.S. Department of Justice (DOJ) against WikiLeaks founder Julian Assange on 17 new counts of violating the Espionage Act of 1917.

The charges against Assange are in relation to his role alongside former Army intelligence analyst Chelsea Manning in publishing classified information through his famed WikiLeaks website. Assange is currently facing a potential 170 years in prison.

The usual arguments have once again sprung up, both in defense of and in opposition to Assange’s activities. A dangerous precedent could potentially be set on either side, as one asks the question of where the blurred line between journalism and espionage really lies.

Many hold the belief that since the disclosures made by WikiLeaks compromised the safety of individuals involved in international operations, Assange’s role in the controversy constitutes a crime.

In the indictment, the DOJ charges that Assange “published on WikiLeaks classified documents that contained the unredacted names of human sources who provided information to United States forces in Iraq and Afghanistan, and to U.S. State Department diplomats around the world. These human sources included local Afghans and Iraqis, journalists, religious leaders, human rights advocates, and political dissidents from repressive regimes.”

Individuals who risk their lives cooperating with the U.S. government could be dissuaded from doing so in the future, should a leaker culture continue to foster in regard to U.S. intelligence. This may have consequences for our ability to execute the type of guerrilla-warfare tactics used in the series of Middle Eastern wars and skirmishes the United States has been involved in recently.

The idea of investigative journalism as a valuable tool and linchpin to a free America is also important in this debate. The revelations uncovered as a result of WikiLeaks disclosures related to the 2016 Democratic presidential primary shed light on the level of corruption, bigotry, and disingenuousness at the highest levels of a major national political party.

A political party that attempts to portray itself as the “default” choice for women, people of color, homosexuals, and all other minorities was caught red-handed in an apparent conspiracy to hurt presidential candidate Bernie Sanders with Southern voters using his faith.

“This could make several points of difference with my peeps. My Southern Baptist peeps would draw a big difference between a Jew and an atheist,” DNC Chief Financial Officer Brad Marshall wrote in an uncovered email.

WikiLeaks also uncovered unsettling examples of racism displayed by DNC operatives. Zachary Allen, a Democratic campaign consultant, questioned children’s apparel company executive assistant LaQueenia Gibson’s name. “LaQueenia is a name!” Allen said in an email to Scott Comer, the finance chief of staff and LGBT finance director for the DNC. “I’m sorry, boo. I hope you got a raise with this title.”

The various methods used by WikiLeaks to obtain information is also central to the outcome of the Assange case. In the Espionage Act case, it’s alleged that Assange worked directly with Manning to hack into a government computer that held classified information and documents. The DNC leaks have been speculated to be born out of everything ranging from an email phishing operation, potentially executed by Russian hackers, to the reason that former DNC staffer and alleged WikiLeaks collaborator Seth Rich is no longer alive.

Ultimately, as of now, it’s clearly the DOJ’s position that “Assange’s actions risked serious harm to United States national security to the benefit of our adversaries and put the unredacted named human sources at a grave and imminent risk of serious physical harm and/or arbitrary detention.”

If the DOJ can prove that beyond a reasonable doubt, that may be enough to silence Assange for the rest of his mortal life.

Julio Rivera is editorial director for Reactionary Times. A Nuyorican conservative columnist and commentator, he works as a business strategist.

Julio Rivera
Follow
Julio Rivera is the editorial director for Reactionary Times. A conservative columnist and commentator, he works as a business strategist.
TOP NEWS